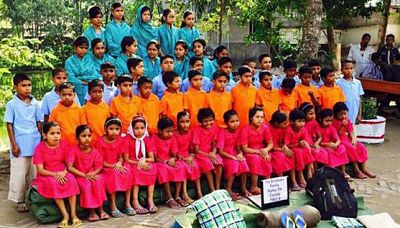 Being a Rotarian means you get to be part of a global network of Rotarians, which in turn means you’re always welcomed by clubs around the world and can get to play a part in changing the lives of others...even when on holiday!

While on holiday in Bangladesh, Canterbury Rotarian Julie Reza got a chance to be involved with some of the activities of the Rotary Club of Dhaka which, this year, organized the distribution of 6,000 sleeping kits to children in various sites in Bangladesh.

Distributing the kits is quite an effort and involves Rotarians and other volunteers of all ages. The work can be physical and particularly uncomfortable in the extreme heat and humidity. Potential recipients are identified via local Rotary Clubs and other organisations. The kits are then packed, stacked and distributed (in large lorries) as part of a project with SCAW (Sleeping Children around the World); each kit contains a ground sheet, a mosquito net, a set of clothing, a water bottle and other useful items. The youngsters line up to receive the kits - some of them are not much bigger than the kits! For record-keeping for SCAW a picture is taken of each child receiving the kits.

This year, Dhaka Rotarians marked the completion of the current round of distribution with a gathering in Dhaka which Julie was able to attend. The next round of sleeping kit distribution will start in November 2017.

Following on from its enormous success in this, the Dhaka Club has recently started to distribute hygiene kits to young women and girls in various parts of Bangladesh. The Rotary Club of Canterbury has supported this effort with a financial donation of £500, which will empower underprivileged women and help them lead a healthier life.

Before Julie returned to the UK she was able to experience more camaraderie with Dhaka Rotarians when she was invited to celebrate Bengali New Year (Pohela Boishak, celebrated on 14 April) with them during one of their regular weekly meetings. The highlight of the evening was traditional folk songs by well known local folk singer, composer, artist, and lecturer Mustafa Zaman Abbasi (also a Rotarian) who entertained the Club with an evening of song and anecdotes.