Rotary BBQ for League of Friends 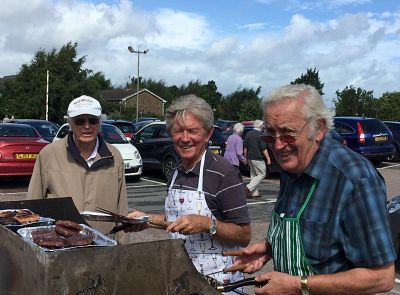 Despite forecasts for rain, several of our Club members had lots of fun running the barbecue at the League of Friends Annual Summer Fair held at Kent & Canterbury Hospital car park yesterday.

The fair, which was fun for all the family, had several stands manned by volunteers and hospital departments. Entertainment at the fair came in the form of Punch & Judy and Morris Dancing. Canterbury Inner Wheel provided customers with food and beverages.

League of Friends Chairman and fellow Rotarian Viv Pritchard expressed his delight with the success of the fair despite the changeable weather. "We all had a splendid fun day and the sun did appear later on. The important thing is that we managed to raise a lot of money. All the profits will go towards helping hospital departments to improve patient care."

Thanks to all the hungry visitors eating the delicious burgers and hot dogs we made £480.50 profit - all of which has gone to the League of Friends.