Our work for young people 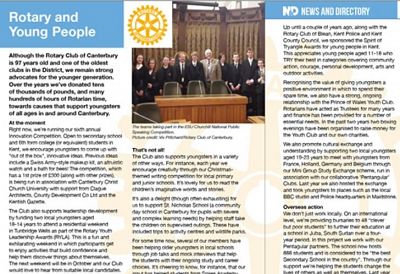 We're delighted that local community magazine 'News and Directory' has published an article about our work with young people - it mentions everything from our Innovation Competition to the family-friendly Annual Duck Race. Look out for the magazine!

[Here's a copy of the full text which News and Directory needed to crop for space.]

Although the Rotary Club of Canterbury is 97 years old and one of the oldest clubs in the District, we remain strong advocates for the younger generation. Over the years we’ve donated tens of thousands of pounds, and many hundreds of hours of Rotarian time, towards causes that support youngsters of all ages in and around Canterbury.

Right now, we’re running our sixth annual Innovation Competition. Open to secondary school and 6th form college (or equivalent) students in Kent, we encourage youngsters to come up with “out of the box", innovative ideas. Previous ideas include a Swiss Army-style makeup kit, an altruistic watch and a bath for bees! The competition, which has a 1st prize of £300 (along with other prizes), is being run in association with Canterbury Christ Church University with support from Clague Architects, County Development Co Ltd and the Kentish Gazette.

The Club also supports leadership development by funding two local youngsters aged 14-18 years to attend a residential weekend in Tunbridge Wells as part of the Rotary Youth Leadership Awards (RYLA). This is a fun and exhilarating weekend in which participants get to enjoy activities that build confidence and help them discover things about themselves. The next weekend will be in October and our Club would love to hear from suitable local candidates.

We’re also looking to hear from local youngsters that plan to give service to a local or overseas community through a scheme or project run by a nationally recognised charity – for instance as part of a gap year. Since 1999 the Club has run a registered charity, the Millennium Scholarship Trust Fund, that helps support such ventures. Since its inception the Fund has given over £35,000 in grants to over 60 youngsters. Through the scheme youngsters have worked, or will be working, in countries all over the world – including Cambodia, Costa Rica, Honduras, Mexico and Zanzibar. Charities involved include Camps International, Raleigh International and African Foundation for Girl Guides.

The Club also supports youngsters in a variety of other ways. For instance, each year we encourage creativity through our Christmas-themed writing competition for local primary and junior schools. It’s lovely for us to read the children’s imaginative words and stories.

It’s also a delight (though often exhausting) for us to support St. Nicholas School (a community day school in Canterbury for pupils with severe and complex learning needs) by helping staff take the children on supervised outings. These have included trips to activity centres and wildlife parks.

For some time now, several of our members have been helping older youngsters in local schools through job talks and mock interviews that help the students with their ongoing study and career choices. It’s cheering to know, for instance, that our input has helped students from Spires Academy have the confidence to engage with highly selective institutions such as the University of Oxford.

Meanwhile, we get students in years 9-11 debating subjects that they feel passionate about by supporting the East Kent heat of the English Speaking Union’s public speaking competition. Held in Canterbury’s Guildhall, this prestigious competition is usually attended by the Lord Mayor of Canterbury. Winners go on to the National Finals.

We’ve also value a long relationship with the children's hospice Demelza House, collecting stamps and providing funds for various projects at the hospice.

Up until a couple of years ago, along with the Rotary Club of Blean, Kent Police and Kent County Council, we sponsored the Spirit of Tryangle Awards for young people in Kent. This appreciates young people aged 11-18 who TRY their best in categories covering community action, courage, personal development, arts and outdoor activities.

Recognising the value of giving youngsters a positive environment in which to spend their spare time, we also have a strong, ongoing relationship with the Prince of Wales Youth Club. Rotarians have acted as Trustees for many years and finance has been provided for a number of essential needs. In the past two years two boxing evenings have been organised to raise money for the Youth Club and our own charities.

We also promote cultural exchange and understanding by supporting two local youngsters aged 19-23 years to meet with youngsters from France, Holland, Germany and Belgium through our Mini Group Study Exchange scheme, run in association with our collaborative ‘Pentangular’ Clubs. Last year we also hosted the exchange and took youngsters to places such as the local BBC studio and Police headquarters in Maidstone.

We don’t just work locally. On an international level, we’re providing bursaries to 48 "clever but poor students" to further their education at a school in Juba, South Sudan over a four-year period. In this project we work with our Pentagular partners. The school now hosts 888 students and is considered to be “the best Secondary School in the country”. Through our support we’re helping the students change the lives of others as well as themselves. Last year we held a fun farm day to raise funds to help this cause and we’ll be doing so again this year.

For a number of years we supported local charity Hope Romania, which helped Romanian orphans; one of our members even joined a humanitarian convoy to help with the orphanage. We’ve donated to charity Mary’s Meals, which provides food to deprived children in some of the world’s poorest communities. We’ve also given donations to Days for Girls and the Rotary Club of Dhaka - both to help make and distribute hygiene and sanitation kits to girls.

Our Club also supports “End Polio Now” – a Rotary worldwide initiative to end Polio. Several of our members have travelled to India, at their own expense, to help on national child immunisation days.

Over the years we’ve supported schools and youngsters in a number of ad hoc ways.

For instance, we recently helped a local school buy a camera for night photography of wildlife, and now look forward to some of their pictures. We also helped a young wildlife enthusiast who runs Kent Little Owl Project with a donation towards bird boxes for Little Owls, a type of owl increasingly uncommon in Kent.

We’ve provided financial help to highly talented local teenage sportspeople in diverse sports such as tennis, hockey and archery....and some have gone on to achieve county and national status. Olympic skeleton hopeful Rachel Hanagan, for instance, received some sponsorship a while ago and it’s been exciting to follow her sporting journey through her updates.

For the last couple of years we’ve helped support Queen Elizabeth's Grammar School (QEGS) in Faversham in the 'F1 for Schools' competition in which teams design a formula 1-style racing car; the team has had a fantastic year, winning the London and South East regional heat and coming 2nd in the UK National Final. Next, they’ll be off to the 2019 World Finals in Dubai!

Our Club has provided seed finance to enable “Big sing” choir concerts to be held for primary schools at the Marlowe Theatre, while a modest donation to All4Fun, Querns Community Centre has helped children in one of Canterbury's most deprived areas.

To help with drug education we’ve provided (and towed around) a mobile classroom to visit primary schools in the District, providing education on substance abuse to children and their parents with the help of teachers.

Domestic abuse charity Rising Sun also receives support, and along with some neighbouring Clubs we fund an ongoing programme that specifically works with adolescents where there’s been serious domestic abuse in their families. One of our members also volunteers for Rising Sun; his work consists of one-to-one and group work to calm major tensions arising after the removal of an abusive parent, strengthening resilience and increase emotional well-being.

We have also helped fund transport for young care leavers who attended a Christmas Dinner organised by a local team - in an initiative inspired by Canterbury’s Poet Laureate Lemn Sissay - to give these young people a sense that people still care about them at what can be one of the loneliest times of the year.

Other support we’ve given over the years includes: purchase of a light laptop for a disabled teenager; funds to a local scout group to purchase a portable fridge that keeps essential medication cool for one of its members; financing a birthday for a seriously ill five-year-old who had never been out of hospital on her birthday; providing high visibility jackets for a primary school; donating to a youth club for an adventure day out; and providing sensory classroom equipment for a challenged primary school pupil.

Youngsters that we’ve supported through our annual schemes often give a presentation to our members. Just as riveting as these talks are talks from those who work with young people. On that score we’ve recently had talks from the Vice-chancellor of the University of Kent as well as the Dean of the new Kent and Medway Medical School; both have exciting ideas for their institutions and we look forward to chances to work with them.

Although not specifically aimed at youngsters – or even the young a heart – our Annual Duck race provides fun and excitement for all the family. During the race visitors get the chance to cheer on thousands of yellow rubber ducks “swimming” down the river at Westgate Gardens. Keep your eyes open for when we announce the date for this year’s race and make sure you pop the date in your diary!

We’re always looking for interesting ways in which we might help local young people. To contact us, for further information about any of the activities mentioned above, or information about us, please email: info@rotarycanterbury.org.uk