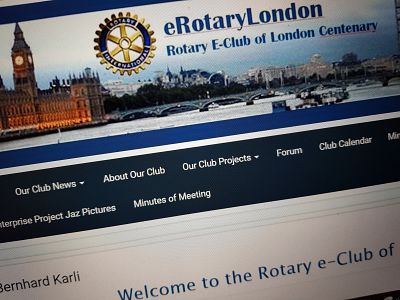 Last week was supposed to be our "scatter week" - a week when us Rotarians attend meetings other than our own. But, sadly, this wasn't possible because of the current health crisis. One of our members decided to try 'visiting' an e-club instead...

I'd heard of e-clubs before - but, to be honest, I didn't really know how they worked. Nevetheless, I'm up for new experiences and the fact that our scatter week was cancelled had me looking for an e-club that I could "join". Sure enough, I came across the Rotary E-Club of London Centenary. The name gripped my attention - firstly, I used to be a Londoner and thought it might give me a chance to re-connect with the capital. Secondly, the 'Centenary' reminded me of the fact that our club will be celebrating its centenary in 2022. So I got in touch a few days in advance of their advertised meeting and followed the instructions sent by their Immediate Past President and President Elect. I was used to online meetings for work - and luckily this e-club used easy-to-use software that I'd used before. I browsed their website to learn more about the club - I wanted to know a little more about what they do.

But on the actual evening (they meet at 8pm) I suddenly thought: Do they have video? Is there a dress code? Should I have prepared? Will they be friendly? Well, the answer was yes (but perhaps not essential), no, no and yes! There was nothing to worry about. The meeting was chaired by their President Bernhard Kali, who welcomed members as they "appeared" in the meeting. Most had cameras on, so there was a panel of smiling faces from the start - it felt like the Brady Bunch (if you remember who they were).

When it seemed that everyone had arrived the President went '"round" the room asking everyone to briefly introduce themselves. I was surprised to hear there were members (and some other visiting members) from Zimbabwe, Northern Italy, India, Denmark, Ghana, France, the Netherlands, and even Montego Bay in East Jamaica! Several Rotarians joined from Stockholm and we also had people from Manchester and London (of course) - around 25 people in total in the meeting. For some, it was early in the day - and for our Indian colleague, clearly a very enthusiastic Rotarian, it was 1am! It was nice to see that during the meeting some members were sitting at desks, while others seemed at home in their lounge or library. The sense was that you were in an informal room with a group of colleagues or friends - almost as if you were gathered round a warm fire on a cold evening.

We started with a exchange of niceties and shared some brief experiences of the current coronavirus pandemic in our respected countries. A surreal concern we all had in common, and we all listened with interest to the member from Italy (the current focus of global attention).

President Bernhard introduced us to our speaker, Kim, who was joining us all the way from Canada. She gave a very interesting talk about a documentary that she had produced with her daughter. Aspects of her talk seemed to resonate with everyone there, which meant there were plenty of questions at the end (well managed by President Bernhard). Perhaps I'll give details of that another day, but one quote she gave was "Happiness is found helping others" - which is certainly appropriate for us Rotarians. Naturally, there were calls for Kim to think of joining Rotary!

Just over an hour after the start of the meeting, President Bernhard drew the meeting to a close with a toast to "Rotary and Peace the world over", to which we raised our glasses (I was glad I had a glass of water with me to raise!) We waved goodbye to each other. It felt a little sad to say farewell to my new international friends - but it won't be for long as I've already signed up for the next meeting!