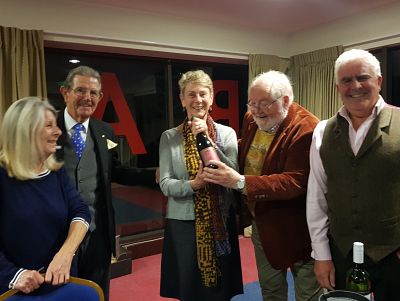 Our Rotarians and guests were given quite a cerebral challenge yesterday during our quiz night, with questions asked touching on everything from history to popular culture.

Fortified by a tasty supper of fish & chips and a delicious dessert, our Members and guests sat at tables in teams of six (pen and paper at the ready) to take part in the quiz. The evening’s questions were read out by quizmaster, Rtn Mike Leadbeater, with the questions themselves having been set by Past President Neil Fraser.

It was clear from the outset that Mike was not going to stand for any nonsense: “The judge’s decision is final,” he declared in a stern voice. There were murmurs of rebelliousness and much cheery mumbling from the floor!

Questions were read out in 5 rounds of 10; lots of head scratching and miming took place as the teams did their best to think of answers. "How old is Joe Biden?", “In which country were Michel J Fox and William Shatner born?”, “When was Canterbury Cathedral consecrated?”, and “What is the boiling point of ethanol?” were all questions asked in the 1st part of the evening. [Answers to questions are given at the end of this article.]

After a short break for coffee, during which one attendee laughingly said the answer to all the questions was probably "Shakespeare", three more rounds of questions followed. Questions included: “Which film actor/actress has won the most Oscars ever?”, “When was the film Die Hard released?”, “What is the chemical formula for methane and for carbon dioxide?”, “Name two actors from The Good, The Bad and The Ugly”, “What is the deepest place on earth?”, “Name the seven dwarfs from Snow White” and, the penultimate question, “What is the most ‘boring’ sport in the world?”.

Teams then swapped answer sheets with adjacent tables before Mike called out the correct answers. There were plenty of gasps, groans and giggles from the audience.

The winning team, with the highest score, was sat at Table 8; the 2nd place went to Table 7. Winners collected their prizes and President Stephen congratulated all the teams and Mike for taking part in a fun evening*; everyone gave the winners and Mike a warm round of applause. [Although billed as a fun evening rather than as a fundraiser, we still raised a small amount, around £33, for PolioPlus from the regular raffle that we hold at all of our face-to-face meetings.]

*With thanks to Mike, who kindly provided all of the prizes for the evening.