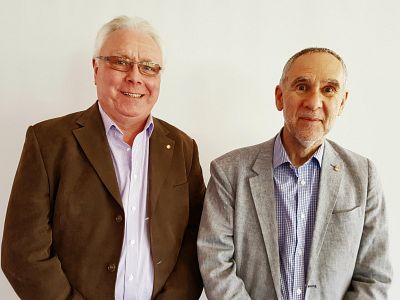 Rotary Radio UK is a great new way for Rotary clubs to spread news about their clubs, activities and fundraising. We were very lucky to learn all about the station at a recent meeting from CEO Steve Wood and his colleague John Robinson.

Rotarian Steve is PP of the Rotary Club of Sittingbourne Invicta and a PHF; John is also a member of the Club. Both live in Sittingbourne and play very active roles in Rotary Radio UK, which broadcasts from The Criterion, Blue Town on the Isle of Sheppey. Rotary Radio UK launched its first broadcast in October 2018; it’s a digital station and can be listened to online from anywhere around the world.

Rotary Radio UK was the brainchild of Steve and John and came about after they got chatting one day and asked each other: “Why isn’t there a Rotary Radio?” This question made them think - a local hospital radio had listeners in more than 90 countries around the world, and Rotary had around 47,000 members in the UK alone. Perhaps they could do better? That was how it all started…

Steve kicked off his talk with a touch of nostalgia, reminding us of a time, in the exciting old days of pirate radio, when many listened to stations such as Radio Caroline. A time when ‘subversives’ such as Tony Blackburn and Noel Edmunds could be heard over the airwaves, broadcasting latest tracks to the UK from offshore ships. (“I wonder whatever happened to those two?”, Steve comically mused).

Most Rotarians now listen to Radio 2, Radio 4 or Classic radio, and to many of us, BBC broadcast mics and our old wireless or transistor radios are what we automatically think of when we think of radio broadcasts. But things are very different these days. Basically, Steve told us that a radio can just be a computer with speakers attached. “The internet,” he added, “is the future of radio”. And latest technology makes that even easier. Where once you might have seen commuters reading a book and listening to music players, now most have an electronic device which they use to serve both purposes. In the old days people, out of habit, would stick to one station all day rather that fiddle around with the dial or press a button. But now, those who have virtual assistants such as Amazon’s ‘Alexa’ just need to download an app and ask: “Alexa, play Rotary Radio UK” to switch to the station.

But going back to the idea of launching a station - it’s one thing to have an idea about digital radio, and another to make it a reality. A big issue was premises from which to broadcast. Commercial spaces were far too expensive. Luckily, they hit the jackpot thanks to President of Minster - Isle of Sheppey - Rotary Club, Jenny Hurkett, and her husband Ian. Jenny and Ian had bought a place called a building in Blue Town as a warehouse for their Kitchen Appliance business. Circumstances changed for them, and research in to the building's history revealed it had once been a music hall. Jenny and Ian had set about restoring it, named it The Criterion…and offered to build studios for the radio station. A whole load of volunteers were involved - including inmates from Standford Hill Open Prison. First floors and ceilings were added – and in due course, mixing desks, mics and other broadcasting bequipment. At last they could announce they were “coming live, from the Criterion”!

With Rotary Radio UK, Steve, John and their colleagues want to influence the image of Rotary, and they want to make sure that Rotary gets the publicity it deserves. For instance, The Bill & Melinda Gates Foundation does great work in supporting Rotary’s efforts to ‘end polio’; but they also get the bulk of the publicity as Rotary doesn’t have the same publicity machine.

Steve showed us a picture of “who they want” – i.e., their vision of listeners. It was a picture of his son. Only after travelling overseas, and seeing Rotary plaques around the world, did his son want to join. Publicity had increased awareness - “He wanted to join the winning team,” said Steve!

John, the station’s technical expert, took over the presentation at this stage. He told us how the station had three computers linked together on a network: one used for the broadcast, one storing the music library, and the third with compression software (which controls sound levels so that output is at a steady level). There is also a compressor that looks after the mics and can remove some of the ‘mannerisms’ of presenters. The server that streams their output is in France. While there are other Rotary stations around the world, none broadcasts 24 hours of the day, 365 days of the year.

There’s a lot of thought that has to go into having a station like Rotary Radio UK. For instance, they have to ensure the show goes on. So, if there’s a powercut or hardware failure they have set things up so that they can still access 1000s of tracks and fillers and continue to broadcast until the Criterion stream returns.

The software that they use, called ‘Competa’, the screen basically has two sides - a music library of over 5,300 tracks on the right and a playlist platform on the left where each presenter can build their own show. When the station is running on Automatic the software automatically populates the playlist. John has patiently had to give each track a genre, year, introduction etc. They can set up rules, allowing a set of music to be pre-sorted with jingles, fillers and so on for a show. Regarding payment for the music – they have a licence with Perfoming Rights Society and Phonographic Performance Ltd that allow them to broadcast a wide range of music.

There are a number of presenters and others that help with the shows. For instance, as well as Steve and John, Rtn David Hatcher, who many will remember from the TV show Crimewatch, does a show. As well as music, interviews and quizzes (the equivalent of Radio 2 for much of the time), the station provides a great way for Rotary Clubs to tells others what they are doing. They are trying to build up a network for Rotary Radio News, telling listeners about clubs and their activities around the country. All Rotarians can contact them at rotaryradiouk@gmail.com or for submitting news items rotaryradionews@gmail.com

John played us a few of their jingles. They are able to create jingles for Rotary Communications (in fact they helped our own club publicise its Fundraising Music Hall Event with a jingle they made). They have also signed up to a government web site that provides public broadcast announcements. These provide important messages but also help give the station an air of authority and credibility.

John passed the presentation back to Steve, who went to tell us more about his own involvement with the show. He was nervous at first, and spoke of two voices in his head when he started broadcasting – that of his grandmother, saying “never speak unless spoken to”, and that of his ego saying “go ahead, you’ll be fine”! In the end it seems the latter won out. He now says: “it’s great fun; I’m 66 and it feels like this is a new and exciting career for me!”

Rotary Radio UK is looking for more people to get involved. Currently, they are trying to recruit someone to run their social media and so target non-Rotarians, their friends and their families who might also enjoy listening to the station. They are very keen to get young(er) people involved.

Rotary Radio UK are happy to hear from Rotarians about their projects and activities or any ideas that they may have. You can visit their web site here. https://www.rotaryradiouk.org