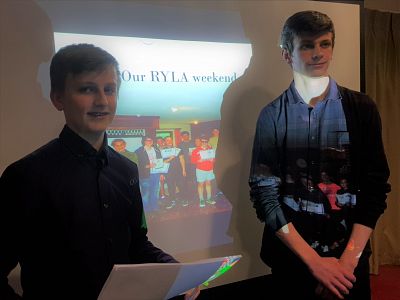 Two youngsters came to our club today to give a presentation about the Rotary Youth Leadership Awards (RYLA) Course that they attended last October with sponsorship from our Club.

RYLA is Rotary's leadership development programme for young people; it aims, through its residential short course, to encourage the development of teamwork and leadership skills in those who have the potential to be future community and business leaders.

Under the scheme, Rotary Clubs within Rotary South East offer young people aged 14-18 years old the chance to take part in RYLA' s unique experience. The scheme emphasizes leadership, citizenship, and personal growth. It also "aims to demonstrate Rotary's respect and concern for youth, provide an effective training experience for selected youth and potential leaders, encourage leadership of youth by youth and recognise publicly young people who are rendering service to their communities".

Last year, our club offered two local youngsters the chance to go on the course. The two schoolboys came to our club today to tell us a little bit about themselves, what they did, and also give us an idea of what they gained from going on the course.

Both youngsters - Samuel Warman, aged 15, and Reece Coveney, aged 16 - are "Young Leaders" at Stelling Minnis Scouts. Samuel (who came this evening with his father Tony) is a student at St. Anselm's School in Canterbury and Reece is at college in Folkestone. (Reece had to step in to the course at short notice after the attendee originally selected had a bad accident.)

The boys told us about the various activities that they were involved with over the residential weekend, starting with a "getting to know one-another" ice-breaking exercise where they had to introduce themselves to other attendees as an animal - in their cases, "Sam the Snake" and "Reece the Raccoon"!

Activities went on into the evening, many of them based on team building and developing their leadership abilities. For instance, there was a "Jacob's Ladder" challenge during which the youngsters had to navigate their way around a series of ropes and logs while working in pairs. They also had to carry out some problem-solving exercises as teams.

Later during the course they got a chance to do some swimming - taking part in a relay race (again, in order to develop their team-building skills). They also got to hear from others and had a chance to make a presentation about a particular charity to the other attendees and course organizers. The boys chose to talk about Shelterbox (which, coincidentally, our Club has supported over the years). During the talk the youngsters told others of the extensive contents of a Shelterbox container - all crammed (Tardis-like) into a box of limited dimensions!

The youngsters had great fun during the course and also felt that they'd learned a lot. They now hope to go on to use their newly acquired skills in their daily life.

The course was based at the Bowles Outdoor Centre near Tunbridge Wells, and the boys reassured us that they had clean and tidy accomodation with good and varied food during their stay! Around 14 people went on the course in total - 11 boys and three girls.

From their presentations it was clear that both boys have gained in confidence by taking part in the course. We hope all of the attendees now build on the skills that they've learnt, keep connections with others that they've met, and hopefully go on to become leaders in their own right one day.