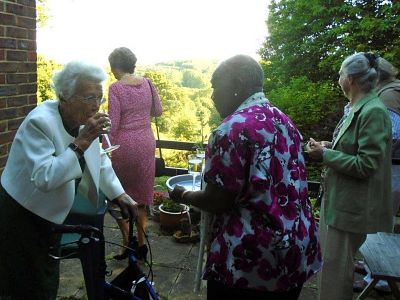 A bunch of over forty Rotarians took part in one of our Club's social highlights of the year last weekend - our "Safari Supper".

Those of you who have heard about our Safari Suppers before, or that read last year's piece by Rtn Kailash Maunick, will know these meals have nothing to do with looking out for animals (except, perhaps, the occasional pet). They are an opportunity for our members to mingle with one another in a home setting, and are a really lovely way to get to know one another better.

Basically, Rotarians and their partners/guests assemble in one place before being divided into groups to have a main course at one home, followed by dessert at another. As with our visits to other places, each Rotarian pays for their meal and the host conjures up something tasty for them all to enjoy - but it's well worth doing so because it's such a fun experience. This year, Rtn and PHF Marjorie Lyle, went on her first Safari Supper since joining our club. Below are a few words from Marjorie.

"We had such a nice time - it was a lovely chance to mix with others. First of all we all gathered at outgoing President Margaret Griffin's home in Rough Common, where Margaret hosted us for an 'Aperitif Reception' [Margaret would not take any expenses]. There was a lovely view of the valley from Margaret's  garden. It was there that PP David Barton, who had made all the arrangements, announced who would be going where. We were all excited to find out about our destinations! I was in the group that set off to PP Robert Yonge's place in Herne Bay for our main course. Others went to other places, so we were all well scattered: Harbledown, Stelling Minnis, Herne Bay, Patrixbourne, as well as Canterbury. There were nine of us that headed to Robert's, with organiser PP David Barton kindly taking me and his delightful grandson, Louis, with him in his car.

At Robert's place we enjoyed Robert and Jenny's hospitality, as well as a choice of a shepherd's pie or fish pie. I opted for the former, which was delicious. We enjoyed lots of pleasant chat before heading off to the venue for our dessert. I was lucky to be in David's group so headed to David's place, also in Herne Bay, with Rtn Rosemary Morton (who'd had her main at Stelling Minnis). Others went to Rough Common, Canterbury, Barham and Chilham. In essence, we went round in a circle between homes!

David was wonderful, very supportive. I did feel sorry for him, it must have taken a lot of effort and some sorting out with spreadsheets for hours. But it was very enjoyable and I had a nice Eton mess made by David's grandson, a Kent College student who has just finished his 'A' Levels. After we finished, Rosemarie kindly dropped me home.

Well, I can say we had a great evening, and it was fun to think we were all going around in an arc of Canterbury. We're all very thankful to David. We had a good mix, and it was a terrific fete of organization”.

David also had a few words to add about the event: "We had a very good show - over 40 Rtns. Sadly, four had to drop out for health reasons at the last minute. My cain course hostess Jenny Yonge had driven back from Norfolk but managed to prepare a lovely main course. I would like to thank to all hosts and hostesses - The Denham's, Pomeroys, Thompsons, Yonges, Pritchards, Boughs, Craggs, Forrests, Mepsteads, Bretts ... and my own grandson, who helped throughout the evening but particularly with preparing and serving the dessert."