Off on a Safari Supper! 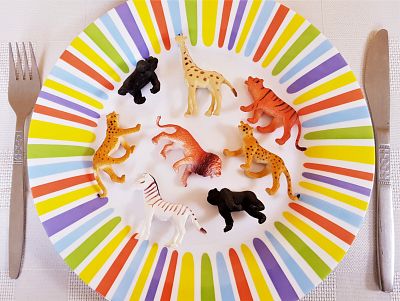 When 'newcomer' to our Club Kailash Maunick was invited to a recent Safari Supper he may have wondered what he was was letting himself in for. But he needn't have worried. Here's his story...

"I was invited to the Safari Supper by our Club's immediate Past President (PP) Sharon Jordan. As I've only been a member for a year this was my first time and I wasn't sure what to expect!

I accepted Sharon's invite, after which she gave me a brief about the night and what would happen - this made me really excited to experience the evening ahead! Unfortunately, though, I couldn't bring my wife along as I couldn't find a babysitter in time.

Safari-goers were all asked to meet at PP Geoff 's house for a quick reception. Almost all of the members who attended were accompanied by their partners, and I had the chance to meet PP Martin's wife, Jayne, Geoff's wife, Tremaine (she speaks a lot of French), PP Robin's wife, Avril, and current President Margaret's daughter, Amanda, who's a teacher in Woking. There were about 20 people altogether.

On arrival we were all greeted with a drink and snack and there was a welcome speech by Sharon, followed by a distribution of envelopes. Everyone received an envelope in which there were details of where their dinners would be taking place. Sharon made sure that everyone had one!

I was to head to PP Tim Brett's place. There, I met with Robin, Rtn Andrew, Margaret and Amanda and, finally, Tim's wife. They warmly welcomed us into their home and Tim's wife, Maggie, prepared a lovely and delicious lamb tagine with salad and rice. Everyone enjoyed the meal, during which we re-introduced ourselves and had a good chat. It was really nice to get the chance to meet Maggie.

After the main meal we were each handed our second envelope of the evening by Tim - this contained details of where to head to for our dessert. I landed up driving back to Geoff's house - as did Margaret and her daughter. There I again met Geoff and his wife and Sharon; I also met Rtn Mark Rosen and his wife, Janice. Again we all had great fun chatting while tucking into fresh fruits, biscuits, cheese, ice creams...and much more!

Amanda and I were then given a royal tour of Geoff's property - by Geoff himself. There we saw Geoff's collection of animals - including donkeys and deers (which we fed), horses, red reindeers, cows and chicken! I also found out that Sharon has a really lovely, big dog!

Personally, I enjoyed the evening very much. I had the opportunity of meeting lots of other people and I learnt a lot about Rotary - and other things as well - from others. I'm so looking forward to the next one!!"

So, in the end it seems that while Kailash might not have had an overseas safari. he had plenty of food, sights, sounds and animals to experience!