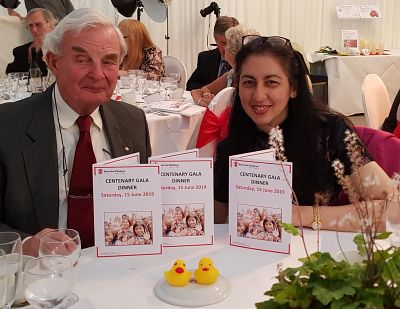 Several Rotarians were invited to join the Canterbury Branch of Save the Children to celebrate the charity's 100th year. Naturally, they were joined by two of our novice ducks who, being youngsters, always like to support those that help children.

Members of our Club have supported many of Save the Children's fundraising activities over the years and Carol Reed, current Chairman, was awarded a Rotary Community Award by our Club back in 2010 for her hard work in the community. (The Rotary Community Award is an award that recognises outstanding contributions to the local community made by non-Rotarians.) At the time, Carol was involved with Save the Children, Soroptimist International (a worldwide organisation for women, working to advance human rights and the status of women) and Canterbury Tennis Club.

Under Carol's leadership Save the Children has raised over £300,000, involving a wide cross section of volunteers and others in Canterbury. To our delight, we learned that Carol was recently awarded a British Empire Medal in the Queen's Birthday Honours List "for services to Save the Children and the community in Canterbury".

The Gala Dinner was held at Howfield Manor Hotel and singers "Viva Acapella" kept guests entertained. (The choir won the Top Choir Kent competition at the Shirley Hall some time ago). Songs included "Amazing Grace", "Sweet Dreams are Made of This", "Somebody to Love", "Tonight" (from West Side Story), "The Night has a Thousand Eyes" and "You are the Sunshine of my Life". Their rendition of Nina Simone's "Feeling Good" was superb and certainly made the audience feel good! Meanwhile, photographer Mike Morrison took photos in exchange for donations to the charity.

During the evening Carol also reminded the audience how Save the Children was started after the First World War by sisters Eglantyne Jebb and Dorothy Buxton to help combat famine in Vienna and Berlin as a result of Britain's blockade. During World War II they refocussed on the UK because of the war. In the 1950s they started to work in Asia, Now of course they are known and work globally.

Save the Children's history: www.savethechildren.org.uk/about-us/our-history

Viva Acapella : www.vivaacappella.com (Viva Acapella will be representing the UK in the Sweet Adelines International Convention in New Orleans, USA this September)

Celebration of Centenary of Save the Children

This year we celebrated the Centenary of Save the Children and I would like to thank all our supporters over the years who have attended the Fund raising events organised by our small Canterbury branch of the charity. We have been very lucky to have Carol Reed as our chairperson for 25 years. She has been involved with the Canterbury branch of Save the Children for over 35 years and in that time the group has raised over £300,000 for the charity. In recognition of all her hard work she has been included in the Queen’s Birthday Honours list with a very well deserved British Empire Medal.

May 19th we had a truly inspiring evensong at Canterbury Cathedral in recognition of the Centenary of Save the Children and we are really grateful for the kind donations given as a result of this, in total these amounted to £1,328.13 which will be going to help children all over the world suffering the effects of wars, famines and other disasters. Many thanks to the Dean and everyone at the cathedral who made this event possible.

Our other major event of the year was a Gala Dinner at Howfield Manor June 15th where we had the amazingly talented Viva Acappella group entertaining us with an uplifting selection of songs. This event raised around £1500 and we were lucky to have sponsorship for part of the costs from our local Utility Warehouse representative Shiel Campbell.