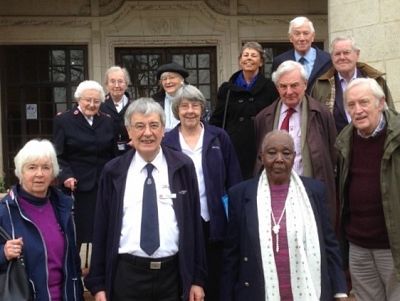 Last Thursday a number of our members had an outing to see the Salvation Army's William Booth College based at Champion Park in Southwark, London.

Named after the founder of the Salvation Army, William Booth, the college is where officers of the The Salvation Army are trained. The main building itself is an imposing brick building with an 190-foot high tower, designed by British architect Sir Giles Gilbert Scott. To many in the local area the college and its tower serve as an obvious landmark, sitting as they do near the top of Denmark Hill, near King's College Hospital.

The College's grade II building has a large Assembly hall and library as well as a recently refurbished museum which is open to visitors. A central 'Hub' connects the Assembly hall to the entrance.

Rtn David Lewis has been a member of a number of Rotary Clubs, Vice President of one (and President of one for two short weeks before being moved elsewhere by the Salvation Army); importantly he is still an active member of the Army. Here he tells us about the trip that he organised.

"The weather was pretty chilly for the first day of spring as our group met at Canterbury East train station. We all bundled onto the 9.09am train to Denmark Hill, arriving at the College soon after, at 10.50am.

There, we were met by our host, Sally-Ann Cairns, who showed us to the modern and comfortable Hub where refreshments were served. Here we met two Salvation Army officer friends of Rtn Nan Miller who joined us for the day.

Our first tour was to the International Heritage Centre, where we were taken through the years of history and present-day work and service of the Army.

Following this we were shown to the Dining Hall where we enjoyed a very good meal. While there we enjoyed seeing the very busy hall bustling with many young people having their meals and sharing fellowship.

After lunch we were given a tour of the large campus, including the beautiful worship hall (the BBC's Songs of Praise programme comes from this building on various occasions). This tour was followed by a visit to the children's nursery and the amazing facilities that the children enjoy (including a look at some baby chicks only a few days old!) The nursery is for the children of the trainee cadets.

From there we went to see the students (cadets) accommodation, followed by a leisurely walk through the grounds back to the Hub.

A trip to the tower was arranged for the few who felt they could manage the 150 steps! But this was well worth it - the view from the top gave us sight of much of London, including the City and Docklands.

Refreshments were provided before we had our photographtaken on the steps at the entrance to the remarkable building.

At the conclusion of the visit we crossed the road back to Denmark Hill station. The train we were due to catch was cancelled, so we eventually arrived at Canterbury West station via Ashford. But despite this last minute detour we were able to reflect on a very interesting, informative, and happy day!"

Our thanks go to the staff at the College that made the day such a success.

You can find out more about the College by visiting its web site.

Picture: Rotarians, spouses and other visitors outside the college. Picture credit: Sally-Ann Cairns/Rotary Club of Canterbury.