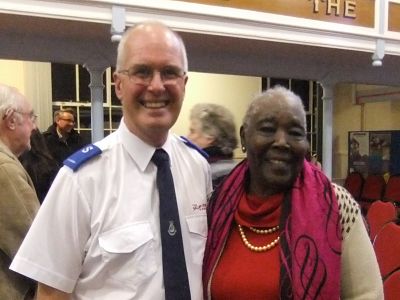 Eight Canterbury Rotarians attended a concert in the Salvation Army Hall on Saturday, when the proceeds of a collection were presented to The Lord Mayor of Canterbury’s Christmas Gift Fund.

The Lord Mayor of Canterbury’s Christmas Gift Fund charity was established in 1952 by four members of the Rotary Club of Canterbury.

It was a delightfully relaxed evening with musical contributions from the Canterbury Salvation Army Band, celebrating 130 years of Salvation Army band music in Canterbury. Sheila Cragg, Trustee and until recently Chairman of the Christmas Gift Fund, congratulated the band on their 130th birthday and reminded everyone that the Christmas Gift Fund Charity had been established a mere 67 years ago.  The Canterbury Salvation Army band had played on Christmas Eve for them in 1952 and had continued to do so every year since then. She outlined the activities of the Charity and encouraged the audience to “dig deep in to their pockets”.

During an interval, the audience were treated to birthday cake with tea/coffee.

Additional musical contributions were made by students from the Simon Langton Girls’ School. An interesting piece for oboe entitled “Hunting the haggis”, music from musical shows (Phantom of the Opera and The Sound of Music) as well as some more traditional church music – The Sanctus had been performed by them about a year ago in Notre Dame Cathedral, Paris.

Major Mandy Sands presented Sheila with £350.05 to launch the Lord Mayor of Canterbury’s Christmas Gift Fund in to its very active season for Christmas 2019.

With thanks to Sheila Cragg for details.