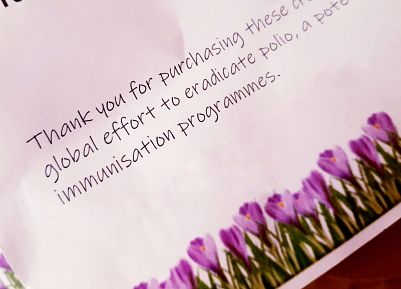 We've been selling crocuses or donating them to worthy causes around Canterbury to raise awareness of polio eradication - over £600 has been raised so far. With 2-for-1 matched funding by the Gates Foundation that means over £1800 will go to the cause.

Our club had ordered several thousand crocus corms from Rotary in Great Britain and Northern Ireland (RGB&I) as part of its End Polio Now activities and our President Elect Tony Loughran helped organise the bagging of these into little packs of 25-30 for the sale.

Members bought plenty of bags for themselves; others they sold to family and friends. Several Members also chose to donate to local schools and organisations, while our Club has donated some to St Dunstan's Church (which we lit up purple on World Polio Day with the two other Rotary Clubs of Canterbury; Canterbury Sunrise and Forest of Blean).

As last year, the variety of crocus is Crocus tommasinianus (Ruby Giant), which are bright purple crocuses. We hope this means that lovely patches of purple will greet you next spring, so do look out for them.

This effort goes in hand with the lighting of St Dunstan's church on World Polio Day (24th October) and launch of our purple-themed recipe e-book to raise awareness about Rotary & polio.

(Have you downloaded your FREE copy of the recipe e-book yet? If not, you can do so here).

The colour purple has come to symbolise polio as purple ink is used to temporarily dye the little "pinkie" finger of children that have received a polio vaccination as part of the global polio vaccination programme. There are just two countries in the world with wild type polio now - Pakistan and Afghanistan - so the programme is very hopeful that soon we will achieve 100% eradication.

Since Rotary and its partners launched the Global Polio Eradication Initiative (GPEI) over 30 years ago, more than 2.5 billion children around the globe have been protected against the disease, with the number of cases reduced by 99.9% from around 1,000 cases per day in 125 countries. In order to sustain this progress, around 2 billion doses of the vaccine have to be given to more than 400 million children in about 50 countries every single year. This is in addition to the routine immunisations that happen elsewhere around the world, including in the UK and Ireland. Without full funding, political commitment and volunteer-led social action, there is a real threat that polio could return, putting children worldwide at risk.

Picture: One of the bags of crocus corms sold this year. Picture credit: Rotary Club of Canterbury.