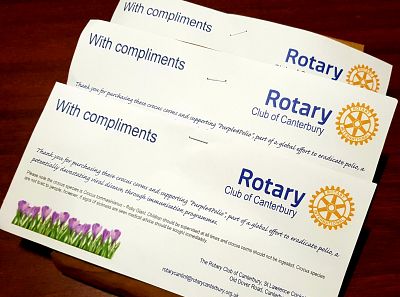 Over 8,000 crocus corms were bagged up and delivered out to our Rotarians who have been collecting orders from friends and family. As a result, over £1,215 will have been raised to help Rotary's efforts to prevent polio.

World Polio Day will be marked on October 24th and our Club hopes to be marking it in various ways that we will tell you more about in due course.

In the build up to the day our Members have been busy collecting orders for crocus corms from family and friends. Tony Loughran, our Chair of Fundraising, had to organise a little team to divide the 8,000 odd crocus corms that we had ordered from Rotary in Great Britain and Northern Ireland (RGBI) as part of its Purple4Polio/End Polio Now project into little bags of 25. The team, Tony, Lewis Norris, Bob Anderson, Sydney Denham, Viv Pritchard and Stephen Thompson braved the cold air beside Tony's garage to bag up the crocuses while trying to adhere to Covid guidelines.

The variety of crocus is Crocus tommasinianus (Ruby Giant); these are lovely purple crocuses, so have a look out for clumps of these as you pass houses next spring. Bob has done a stellar job of selling the crocuses to villagers in Littlebourne, Ickham, Wickhambreaux and Stodmarsh, so these villages may be particularly purple!

Our Club will also be donating corms to St Dunstan's Church (which will be lit purple on World Polio Day as part of a joint initiative with Rotary Club of Canterbury Sunrise) and the Umbrella Centre (for planting in their patch in Westgate Gardens).

Why purple, you might ask? Well, it's because purple ink is used to temporarily dye the little "pinkie" finger of children that have received a polio vaccination as part of the global polio vaccination programme. As you may be aware, this year the WHO African region has received wild polio-free certification – a major milestone in eradicating the disease worldwide. There are just two countries in the world with wild type polio now - Pakistan and Afghanistan - so the programme is almost there on 100% eradication.

Since Rotary and its partners launched the Global Polio Eradication Initiative (GPEI) over 30 years ago, more than 2.5 billion children around the globe have been protected against the disease, with the number of cases reduced by 99.9% from around 1,000 cases per day in 125 countries. In order to sustain this progress, around 2 billion doses of the vaccine have to be given to more than 400 million children in about 50 countries every single year. This is in addition to the routine immunisations that happen elsewhere around the world, including in the UK and Ireland. Without full funding, political commitment and volunteer-led social action, there is a real threat that polio could return, putting children worldwide at risk.

It was good to hear the Prime Minister, Boris Johnson, mention Rotary's efforts during PMQs recently. Our Club, which has several members that have taken part in the vaccination programme, is proud to have supported the scheme over the years.