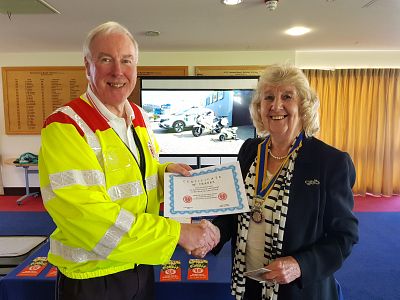 We all know that timely blood transfusions can save lives – but what happens when a hospital needs blood out-of-hours? Who gets the blood to where it’s needed? On Tuesday we heard all about this from Trevor Sayer of SERV Kent Bloodrunners.

SERV, which stands for ‘Service by Emergency Response Volunteers', is a registered charity that transports blood, blood products and some other clinical materials for hospitals and hospices in Kent outside normal working hours. Volunteers usually work at evenings and weekends – when NHS Blood and Transplant, that normally does daytime blood deliveries, has limited availability.

Chair of our Community Service Committee, PP David Barton, introduced Trevor by telling us a little of the charity’s work and describing the many volunteers that work for SERV Kent as “heroes that work for no reward”. We recently donated some funds to them.

Trevor started his talk with a bit of history. In the 1960s a lady called Margaret Ryerson and her husband first set up the Volunteer Emergency Service (VES), using (motor)bikes to transport blood to where it was needed. He showed a video from back then which showed how volunteers scattered around the country helped transport blood, with all volunteers paying for their own petrol. One young rider in the video was only 17 years old! These days, volunteers have to be over 21 years old.

SERV was set up in 1981 when a couple of motorcycle couriers realised that overnight services are very restricted, with hospitals relying on expensive taxi or courier services, or the assistance of the police or ambulance service, to transport emergency blood products. The service – which works for no charge, so relieving pressure on limited resources – gradually built up and made contact with local hospitals. In 1993 Alan Pasterfield brought the service to Kent. Initially there were only a few members, but Alan was able to increase the numbers over a period of years. There are now around 140-150 volunteers in Kent, both male & female.

The service now works with hospitals including Darent Valley, Medway Maritime, Maidstone, Pembury at Tunbridge Wells, William Harvey Ashford, Kent & Canterbury, QEQM in Margate, Folkestone, Buckland in Dover & Benenden. Benenden also uses William Harvey for blood tests. They also work with Demelza Hospice for Children that is based in Sittingbourne and Eltham and Ellenor Hospice in Gravesend. Their ChYPS service cares for children and young persons in their own home in Bexley & West Kent. Work with hospices usually entails the collection of prescriptions and medication from late night chemists for the children in their care.

They also assist patients on home kidney dialysis, delivering samples for medical analysis or helping deliver the peritoneal fluids that they need. SERV Kent also delivers donated breast milk to neonatal units – this is needed for premature babies (the funds that our Club donated are to be used to buy boxes to transport this milk).

Occasionally SERV members are asked to carry our more unusual tasks – for instance a little girl admitted to a hospice left her teddy at home, so SERV were able to bring it to her!

There are now a number of groups across the country, and services may soon be set up in countries such as Australia; all are charities and all members are volunteers, with most drivers/riders having their own cars/bikes and paying for their own fuel & running costs. Trevor, a driver, has access to one of SERV Kent’s own vehicles for talks, fundraisers and events - but still pays for his own fuel, although he does have a fuel card to help with specific areas of his work. Since December 2015 he estimates he’s travelled around 61,000 miles!

Volunteer drivers/riders join as members once they’ve been able to demonstrate driving/riding competency and have passed appropriate training. Car drivers are trained in their own cars, while bikers must have advanced riding qualifications or passed police/ambulance training or a DSA advanced riding assessment. Training competency is refreshed every year.

Volunteers work on a rota, usually with a mix of drivers & riders.  A controller, working at home with their mobile phone, takes the call from the hospital and then works with controllers from other areas (mainly Surrey & South London and Sussex but other Counties too) to ensure that the delivery is made safely and efficiently. Most members have normal jobs, so they need to be mindful of the effect of their volunteering on their normal work. The service runs every day of the year – even Christmas and New year. Bikes are taken off the road during winter months as the blood needs to be kept at 2-28 degrees C.

Kent is split into two regions – North and East. So as to ensure no driver/rider has to travel too far, volunteers will often meet (at petrol service stations and other designated places assigned as changeover points, for instance) to hand on their deliveries – allowing products to be moved around the country as needed. It is not unusual to meet drivers & riders from other Counties who are collecting blood etc. for hospitals in their areas. There are three drivers/riders in East Kent (serving Margate, Canterbury etc) and four drivers/riders in North Kent (serving all the other hospitals). The ‘headquarters’ is at Medway Services on the M2,  secure and well lit. Blood products are carried in boxes (much like cool boxes with thick insulation); each can hold up to 12 units of blood or platelets.

The operation is complex; Trevor gave an example of blood and platelets being needed for QEQM in Margate. First, QEQM’s pathology lab will call the  NHS Blood & Transport Blood Bank at St. Georges Hospital in Tooting, London, where the donated blood is usually taken for processing, to ensure that they have the required product. They would then call SERV Kent to arrange the delivery. The controller then organises and despatches volunteers as needed. The Surrey group will bring boxes from London to the pre-arranged changeover point for 10.30pm. The Kent driver/rider takes the box to their HQ where it is handed over to an East Kent volunteer to take the box to Margate. A timed, dated receipt is kept for each stage. Finally, items are signed into Margate path lab.

SERV also assists the air ambulance service. (Following an annual review in 2012 the service decided it needed to carry blood on board). The Kent, Surrey & Sussex Air Ambulance Trust was the first Trust outside London in 2013 to carry blood onboard the aircraft. Since then a number of other Air Ambulance Trusts are carrying blood on board their aircraft which, undoubtedly, saves lives. This has a separate rota and the blood (4 units of O negative, ‘universal donor’ blood) is kept in smaller temperature-controlled boxes. Unused blood is returned to William Harvey, where it goes back into the system. If blood is used, it needs to be restocked. A separate team of volunteers are needed for this, using fully marked cars and motor bikes.

Two of SERV Kent's bikes were obtained from Yamaha, while racing driver John Surtees (who found the Henry Surtees Foundation in memory of his son who died in a motor racing accident at Brands Hatch in 2009), sponsored a 4x4 from Honda. Staff at Insurers AXA PPP in Tunbridge Wells made SERV Kent their charity of the year in 2015 and, raising funds through various events which included the Three Peaks Challenge & Dragon Boat Racing, enabled SERV Kent to buy a car from Honda.

SERV Kent needs around £40,000 pa to cover its costs. They are totally reliant on donations and volunteers as riders/drivers, controllers or fundraisers. To find out more, click here. Collection tins can be seen in shops and offices.

You can watch the video from the 1960s about SERV’s predecessor here.

If you would to hear more about SERV Kent - Bloodrunners, please have a look at their website - www.servkent.co.uk - and leave a message under the ‘contact us’ section. They will respond quickly to your enquiry.