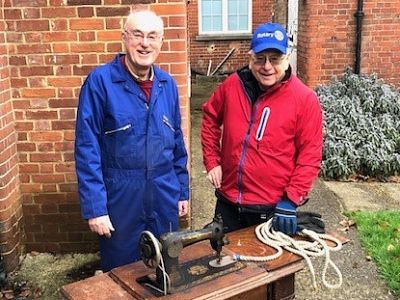 Rotarians are certainly people of action though, as far as we know, no member of our Club has ventured out on a pogo stick. Nevertheless, one of our members recently DELIVERED a pogo stick and other items to Tools for Self Reliance in Canterbury.

We're not sure if it's as a direct result of this article, but we were contacted by someone from Harbledown who had an old treadle sewing machine, pogo stick and child's scooter that they no longer needed. TFSR can refurbish such old sewing machines and send them to some of the poorest parts of Africa where they are used to help poor families set up their own small business following small scale community skills training.

So, after encouragement from fellow Rotarian Bob Anderson (who is also a founder member of the busy Canterbury TFSR branch), Past President Richard Kemball-Cook went off to collect the items and deliver them to the TFSR workshop. Little did he know that he'd be moving the sewing machine from Harbledown to the workshop on foot, with the machine carefully placed on a trolley. Richard says “Progress was perilously slow and there were roads to cross. Thankfully, there were no close encounters - the Singer machine is a heavy cast iron machine, so I’m not sure who would have come off worse had there been one!”

We're not sure what TFSR will do with the pogo stick and child's scooter, but often they sell items such as these at boot fairs or via ebay. Any funds raised from such sales will go towards funding containers which are used to ship tools out to Africa.

Our Club has supported TFSR and the local Pilgrims Hospice workshop for over seven years. Just a few weeks ago we received a letter of thanks from the leader of the volunteer team thanking us for our contribution towards the purchase of a PAT (Portable Appliance Test) machine, which is now in situ in the workshop.