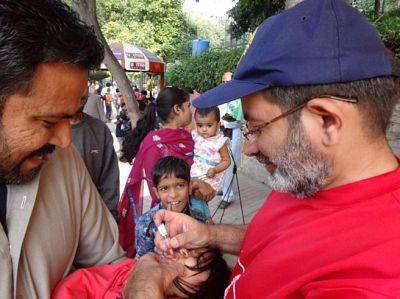 It was a great honour for our Members to be joined at our regular Zoom meeting by Shehzad Ahmed a while back. Shehzad gave us a talk on his "End Polio Now" journey, live from Pakistan.

Shehzad Ahmed, a member of the Rotary Club of Lahore Garrison since 1997, is currently the Rotary Coordinator of Rotary's Zone 1B, which includes Pakistan, Bangladesh and Indonesia. He is also a Past District Governor (PDG).

We were also joined at the Zoom meeting by a number of other senior Rotarians from Pakistan and the UK.

Shehzad's talk was very timely as it was just before World Polio Day (24 October). Also, this year the World Health Organization gave the WHO African region certification for becoming "wild polio-free". This is a major milestone in the global initiative to eradicate polio - an initiative with the commitment that "no child will be paralyzed because of polio".  Just two countries - Pakistan and Afghanistan - still have cases of wild-type polio.

Shehzad was introduced to us by one of our Members Rtn Farrukh Hussain, who has known Shehzad for many years. In his opening words Farrukh, who briefly listed Shehzad's awards and achievements, said he "wouldn't be far wrong" if he said that Shehzad was "Rotarian No. 1 of Pakistan"!

Shehzad is currently serving as the Chair of Blindness Prevention Rotary Action Group and has been "a leading light in many polio campaigns". We learned he was educated at Cadet College Hasanabdal in Pakistan and became a Wing Commander (the Best Cadet) before travelling to the USA to Iowa State University to study for an MEng. We also heard that as well as being Chief Executive of a Management Consulting company, he runs a not-for-profit organisation called "Paradise". Farrukh described Shehzad as "eating, drinking and sleeping Rotary". We gather his whole family is very much part of the Rotary family too, with his wife active in Inner Wheel and even his daughters being Rotaractors (members of Rotary's junior arm).

Referring to the fact that two countries still have polio, Farrukh commented that "the tail of the elephant is still there!" ... and this would be what Shehzad would talk about.

Shehzad started his talk by telling us that he'd be talking about the End Polio Now initiative - "a journey for Rotarians all around the world, but especially in Pakistan" - a journey that started in 1985. Back then, there were around 325,000 cases of polio in 125 polio endemic countries around the world [despite the fact that the disease was relatively easy to prevent with a simple vaccine that can be given as a drop into the mouth].

By contrast, thanks to the enormous vaccination efforts of Rotarians, and their Global Partners (CDC, UNICEF, the WHO and recently the Gates Foundation), by 2011 there were fewer than 1,000 cases in four "PAIN" countries - Pakistan, Afghanistan, India and Nigeria. In 2014 just three countries still had polio (as India reached the target of three years without any cases; countries have to have no cases for three years before being declared polio free by the WHO).

And now, in 2020 - there are just Pakistan and Afghanistan left - will less than 100 cases reported in each country this year. However, the numbers have been going up over the last few years (which is why vigilance and ongoing monitoring is so vital - although there may be no cases, the virus is still present).

Following this status update, Shehzad went over what Rotarians in Pakistan are doing to tackle polio - the main activities centering on assisting with immunisation, funding and distributing speaking books about polio in local languages, supporting containers at Cross Border Permanent Transit Points (i.e. busy highways) - so that health-workers can immunise children in transit, and providing solar water filtration plants (as the virus is associated with poor sanitation).

Shehzad briefly mentioned some future plans, including cleanliness campaigns in high-risk areas and further resource and support centres. We also learned of the Coco-Cola Foundation's support.

Shehzad showed us a number of slides in which various people from around the world had helped during immunisation programmes in Pakistan. Two such visitors were PDG AnnLee Hussey from the USA and Past President Susanne Rea from Australia, both polio survivors.

We learned about the "World's Greatest Meal" initiative to help end polio, polio awareness walks, and roadside awareness campaigns. We also learned of the efforts of the local Rotaract Club - including Shehzad's own daughters’ work.

Shehzad ended his talk with an invitation to our Members to visit Pakistan and take part in an immunisation day. He showed a picture of his baby grandson Mikael Jalal, already wearing a Rotary T-shirt to raise polio awareness!

The talk was followed by many questions from Members - including from our Members Viv Pritchard and Richard Kemball-Cook, who have taken part (along with Sydney Denham) in immunisation days in India. Richard led the vote of thanks and also - quite poignantly for these current times with the coronavirus pandemic - told us how he himself had got interested in polio prevention because of his mother's great fear of polio. "I didn't want any other mother to be similarly frightened", he said.

To find out more about the Rotary Club of Lahore Garrison, click here.