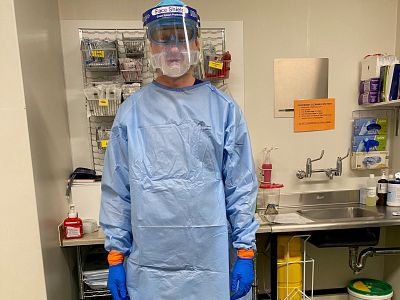 As we in the UK marked 1 year since our first Covid-19-related lockdown yesterday, our Members got insight into the Covid-19 situation in two countries from ICU doctor Simon Hellings.

[This article describes treatment of Covid-19 patients and the work of intensive care staff that some readers may find distressing.]

Simon, a consultant intensivist and anaesthetist, joined our Zoom meeting all the way from a hotel room in Perth, Australia, where he is currently on day 7 of two weeks of quarantine, having just returned to the country from the UK. His days in his shut room, he says, are punctuated by knocks on the door signalling the arrival of food and the excitement of discovering what his meal would be. He was, therefore, delighted to be joining our large and enthusiastic group at what must have been a very late hour for him!

First, we got a little bit of background from Simon. Trained as a doctor in the North West of the UK, Simon worked for the NHS in the UK for a total of around 16 years, most lately as a consultant in intensive care at Manchester General Infirmary, before emigrating to Perth (the capital city of the state of Western Australia) four years ago.

Perth, we learned, is “probably one of the most isolated cities in the world” – it’s around 1,300 miles from Adelaide (in the south of the country). Jakarta in Indonesia, we were told, is closer to Perth than Sydney!

Australia itself has close ties to the Far East; for instance, it is very reliant on trade with China and there are many other links with China. One such link is the large number of foreign students that come to Australia from there. Australians, therefore, followed the first reported outbreaks of Covid-19 in China with nervous interest. The prediction was that Australia would be hit hard by Covid-19.

At Simon’s hospital the staff went through lots of training in preparation for Covid-19 patients when they first learned about the Chinese outbreaks. They practiced without PPE (personal protective equipment) so as to conserve it for when (if) the disease reached their shores. They worked out how to carry out critical care, started to empty hospital beds in preparation, and managed to get good supplies of PPE. “It wasn’t a panic,” said Simon, “but it certainly was a very intensive period of activity”.

The first Australian cases were reported at the end of January 2020 (four incoming travellers from China); WHO declared the disease, caused by a new coronavirus, a ‘public health emergency of international concern’ later that month. At the end of February, Australian Prime Minister, Scott Morrison, activated Australia’s response plan and all flights from China were suspended. Around March 20th the Australian border was closed to anyone other than Australian citizens unless they had an exemption certificate.

Australia has a federal system, and the Premier of Western Australia, Mark McGowan, closed the state’s border – asserting “Our border arrangement will stay in place until such a time as it’s healthy and safe to bring them down”. Since then, everything within the state has carried on pretty much as normal. But, thanks to the drastic measures, the state seemed to remain free of Covid-19 and Simon, trained and ready to work on Covid-19 cases, never treated any while there.

Meanwhile, Simon was in regular contact with his former friends and colleagues in Manchester who were busy treating Covid-19 patients. Driven by a sense of altruism and the desire to help his colleagues and to learn how to deal with Covid-19, Simon decided to come back to the UK (he received an email that his GMC registration had been re-instated as part an NHS response to the pandemic). Coming back was a hard decision which he had to discuss at length with family and colleagues; he also had to get special permission to leave the country as there was a ban on leaving Australia.

On his return back to Manchester Royal Infirmary, Simon found his old intensive care unit (ICU) had expanded massively. It now had 89 beds – most of which were reserved for Covid-19 patients. Where, in the old days, patients with infectious disease were separated off in side rooms, the situation had reversed. It was now the non-Covid-19 cases that were treated there. The entire unit had been delineated into three patient areas by colour – one area for Covid-19 patients, another for non-Covid-19 patients, and a third for “unsure” cases.

Simon also shared with us his own impressions of when he first returned to the hospital. Where once corridors were bustling with visitors, he found them deserted as regular visitors were no longer allowed.

As most of us already knew, the main problem with Covid-19 is with the lungs, and Simon showed a set of X-rays to illustrate this problem. In the first, taken on the patient’s admission to hospital, the normally black area of the lungs had a little bit of abnormal grey. By day 8 of illness, the patient had shown rapid deterioration; normal black lungs could barely be seen in a fog of grey. He also pointed out that the patient now had a breathing tube, a feeding tube and a line via which medicines could be administered. The patient was a critically ill Covid-19 patient.

Simon told us about the staffing situation in ICU. In one picture we saw a group of intensive care staff; some of the nurses were new to ICU and had to receive special training and be supervised in their work. “Being an ICU nurse is pretty technical – there are lots of infusions, pumps, sometimes dialysis machines. The ventilators are complex. It was a big ask of these nurses – and they were brave to take on the challenge”.

Despite the stress and onslaught of seriously ill patients, the team members were incredibly supportive of one another and the atmosphere was generally good. There was recognition of post-traumatic stress disorder (PTSD) among some staff.  Where, normally, around 15-20% of ICU patients may die, with Covid-19 around 30-40% of patients would do so. Dealing with distressing deaths so regularly was taking a big toll on staff. Simon told us of interesting and supportive initiatives around the hospital – from cakes and biscuits to posters of successful cases – that helped to keep up the spirits of exhausted doctors and nurses.

Simon returned to the issue of PPE – “a very big issue,” he stated. At the time there was still limited understanding of the disease – and when it first came the UK people didn’t know whether it was as dangerous as Ebola. There were horror stories emerging of PPE shortages from New York and other places around the world – and no-one really knew what sort of PPE was best. A N95 mask was a vital piece of equipment – but it had to be tested for fit with staff moving around to ensure it was effective. Taking off PPE was also given a great deal of importance – you could wear it and stay safe and then lose all the protection by taking the PPE off in the wrong way. Simon shared a picture of one of his colleagues (see picture) wearing full ICU PPE for treating Covid-19 patients: a visor, an N95 mask, gown, gloves and, importantly, rolled up sleeves that meant the staff member could wash hands thoroughly between patients.

Simon next reflected on the learning that has evolved globally since the first Covid-19 cases. We now know that the current strains of Covid-19 do not result in disease as deadly as Ebola and are not transmitted in the same way. We also now know from evidence that emerged from China and Italy that proning (laying patients on their front) improves oxygen levels and saves lives. Other practices have helped improve treatment – such as check lists for busy teams. “Check lists are very powerful instruments,” Simon said as he played a short video of a nurse reading through a check list. A lot of the huge amount of research that has emerged over the last year has emerged from the UK, possibly helped by the fact that we have a unified health system and can therefore conduct massive trials. Dexamethasone, an inexpensive drug, has been found to be beneficial to some patients; as a result, overall, there had been a changed standard of care around the world.

Returning to the topic of proning, Simon described what a challenge this could be for ICU staff. Patients are proned for 16 or so of every 24 hours – which is a huge task in itself as patients have tubes and lines and many are overweight. Every 4 hours the patient’s head has to be turned to avoid pressure sores. And all of this needs to be recorded. Another thing we learned about was the importance of rehab – patients ill and in medically-induced comas for long periods of time will lose muscle mass and bone density, so staff needed to help keep their bodies moving with daily physio.

Another thing we learned about was that of patient delirium – a rather distressing feature of the illness for seriously ill patients. Unwell and surrounded by gowned staff, bright lights and loud noises, many felt they had been abducted. Nurses keep diaries for the patients, which helps patients with PTSD – and even using earplugs and eye masks as in airplanes can be beneficial for patients.

Finally, Simon made clear for us the issue of co-morbidity. We could tell his frustration with the way deaths or severe illness in patients with co-morbidities were described. “Actually, many, many people have co-morbidities – these could just be a high BMI (body mass index, a measure of obesity) or high blood pressure or diabetes. It was the latter two, together with multi-generational housing and other possible reasons, that he felt might explain the relatively high numbers of black and Asian patients he had seen.

Thankfully, new research and the resultant new treatment regimes were leading to lower patient numbers in ICU – (though, perhaps, those now coming through from the main hospital wards were sicker as they were the ones not responding to treatment). Interestingly, Simon feels there is an atmosphere of innovation that has bloomed in hospitals, with much bureaucracy swept aside and innovative techniques emerging out of necessity.

Simon is hopeful about vaccines and believes that they will help pave the way out of the current situation; he praised the UK’s work on this. Now back in Australia he reflects on his work in the UK – it was a very interesting and challenging time for him and it seems he learnt a great deal – which he hopes he won’t have to use back in Australia. When he left Manchester ICU, cases were decreasing already, probably as a result of the vaccine rollout and lockdown. Patients were not going from wards to the ICU as they had been.

It was on this positive note that Simon ended his talk; he was thanked by our President Alan and faced a number of questions from a captivated and enthusiastic audience.

[This article has been modified since first publication.]