Visit to Smallhythe & Chapel Down Vineyard 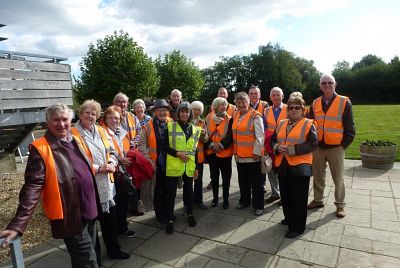 A group of Rotarians, Partners and Guests visited Small Hythe and Chapel Down Vineyard and Winery at Tenterden.

Photos by Jenny Anderson
click or tap any image to enlarge

Small Hythe is a half-timbered house built in the late 15th or early 16th century and since 1947 cared for by the National Trust. The house was originally called 'Port House' and before the River Rother and the sea receded in the seventeenth century, it served a thriving shipyard. In old English hythe means "landing place".

It was the home of the Victorian actress Ellen Terry from 1899 to her death in the house in 1928. The house contains Ellen Terry's theatre collection, while the cottage grounds include her rose garden, orchard, nuttery and the working Barn Theatre.

A welcome cup of coffee preceded a very interesting talk in the Barn Theatre on the House and its history and the next hour was spent exploring Small Hythe and its grounds before heading back to Tenterden for an enjoyable lunch at the Vine Inn (a venue to be thoroughly recommended).

Returning to Chapel Down we had a guided tour of the Vineyard where we learnt about the different types of grape and how they are imported and grown. On to the winery where we were shown how the wine was made, bottled and kept. Chapel Down produces a wide range of sparkling and still wines, together with an award-winning range of Curious beers & cider. The sparkling wines are created using the traditional method, the same as Champagne, and from fruit sourced from its own and partner vineyards across the South-East of England.