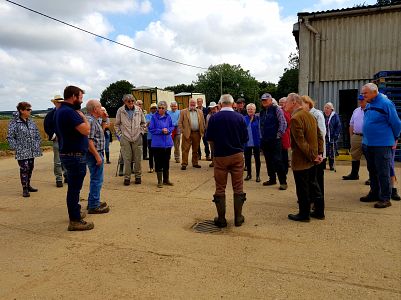 Nowadays it's so easy to nip out to the local store and buy some fresh or frozen spinach - but how much thought do we give to how that spinach was grown? Well, many of our Members learnt more the other day when we went to visit PM Mayes Farm in Ickham.

It was a typical summer's day - a little bit of sun, cloud and breeze - when our troupe of Rotarians and their guests arrived at the farm, just 15 minutes-or-so away from the centre of Canterbury. There, we were met by Patrick Mayes and his son Michael who currently run the farm.

Patrick told us that the farm has been in their family since 1880. Since then, the farm has got bigger and bigger. Initially, it was just a small market farm, selling its produce at local shops. The farm gradually expanded and at one time included livestock such as sheep in its business. We learnt that the farm now grows maize and other cereals, although over the last 12 years Patrick and Michael have also been growing salads. Their specialty is spinach.

First, we were taken to one of the large farm buildings that acts as the seed store. The farm grows around 20 different varieties of seeds. These seeds can grow at different speeds according to their variety, time of year and the weather conditions. Early in a season, for instance, the seeds take around 60 days to grow from seed to the spinach that is ready for harvesting. During the summer the number of days becomes as short as 28. Right now, it's around 31 days.

Michael gave us many, many facts and figures about growing spinach, his comments often being met by oohs and aahs from the audience. The farm's spinach crop grows on around 40 hectares [1 hectare is around 2.5 acres], and through the season there are about 2.5 crops. Seeds are "incredibly expensive" we discovered - each bag costs around £200. Most seed comes from Holland or the USA (apparently there are no suitable seed houses in this country). Michael reckoned they plant around £4,500 worth of seed per week - and harvest around 32 tonnes of spinach per week!

The seed variety (mostly hybrid) is changed every 4-6 years to maintain disease resistance; it's very easy for the farm to lose a lot of spinach due to mildew. Just recently, for instance, the alternating very wet and hot conditions resulted in the loss of a lot of stock. Since this July, seeds have to be untreated as treated seed have been banned. Other than disease, another problem that spinach farmers face is bolting - this is when the plant produces seed too early, making it unsaleable.

The seeds are sown using a special piece of machinery (which we saw) called a drill seeder; this seeder, composed of a seed hopper and large rollers, drills around 1200 seeds/metre. The drill itself is "pulled" by a tractor. These vehicles, we learnt, are equipped with a special radar system that allows the ground speed to be regulated and also allows the speed at which seeds are planted to be adjusted.

Although we might imagine that after harvesting the spinach goes straight from the farmer to the supermarkets (such as Sainsbury's), this was not the case for this farm. Instead, the farm supplies a "packer", who in turn supplies the supermarkets.

Growing spinach commercially is risky and takes a lot of thought and planning. Michael told us they plan for 3 weeks ahead when dealing with their packer. Surprisingly, "it's easier to trash a crop in the field" than later in the process.

Michael was met by a raft of questions from the very curious audience before he took us out to the fields. There, we could see neat, long rows of spinach reaching into the distance. Adjacent to this spinach bed was a field of wheat. We learnt that it's very important for the farmers to rotate their crops. Here, they tended to grow salad crops for 3 years before switching to growing an arable crop (such as maize) in the same bed. The bed we saw, planted around the 10th of August, would give rise to about 3.5 tonnes of spinach in another 2 weeks. The harvesting process, we learnt, is short and sweet - taking only around an hour and a half for the entire bed!

We learnt that manpower for harvesting has been an issue of late following Brexit; although "Brits" do apply, they usually give up after a few days of hard work. As such the farm does still rely on Europeans who are willing and able to work the requisite long, hard days.

Like all farmers, Patrick and Michael have to look out for insects; they do use pesticides - different ones at different times. The main pests are flea beetles and leaf miners, although the Russian white moth can also cause a lot of damage. Basically, the pests change on a year-by-year basis. Surprisingly, slugs are not a problem because of the intensive farming; we also learnt that "salads are not great for worms", which is why it's important to rotate/rest the ground. We also learnt there were no moles - to which one audience member quipped "would you like ours?"!

Interestingly, we learnt that biomass left over from the maize crops can be a very effective natural fertiliser.

Next, we were led back to the farm buildings and were taken into a large building that serves as their "refrigeration area". Here, there was an immediate drop in temperature to around 1.5-2 degrees celsius (contrasting to the temperature of 18-23 degrees celsius when harvesting). The main reason for dropping the temperature was to increase the life of the spinach. On arrival in crates the spinach is placed by forklift trucks into a large vacuum cooler which, much like a big Hoover, pumps out air. This causes any water in the spinach that might cause the spinach to rot to "boil" off. The emerging spinach is cooler and drier, but then needs to be stored with a fine mist of water so that it’s nice and fresh. The time in this refrigeration area is the "bottleneck" of the whole spinach farming process.

The final process at the farm is to load the crated-up spinach straight from the refrigeration area into the back of waiting trucks.

Naturally, all this talk of spinach made our little group a bit peckish so, once we'd swapped our muddy wellies for cleaner footwear, we headed off to Ickham Village Hall with Patrick and Michael for a lovely lunch of home-made lasagne and home-made apple crumble cooked by President Stephen Thompson's wife, Sue. Sue and Jane Loughran, wife of our President Elect Tony, did a splendid job of setting things up and making sure we were fed, and a willing "army" of volunteers helped wash up and clean the hall after.

Stephen led a vote of thanks for Patrick and Michael and we gave them both a warm round of applause (and some tipple) to show our appreciation. Of course, we had fresh spinach salad during our meal to fortify us all for our journey home – and were also supplemented with a bag of spinach each, generously gifted by Patrick and Michael.

Picture: Our Members and guests listen to Michael and Patrick a they tell us about the farm Picture credit: Rotary Club of Canterbury.

You can see further pictures on our Facebook page: https://www.facebook.com/rotarycanterbury