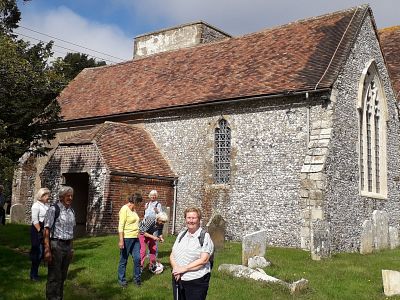 Some of our Members and their partners recently had an outing to the nearby village of Stelling Minnis, visiting the local windmill and church while there. Here, Rtn Brian Dobinson gives his own account of the outing.

Stelling Minnis is a pretty village situated around 8 miles south of Canterbury. On a lovely sunny 8th September groups of Rotarians and their partners, suitably socially distanced as per current guidelines, took part in a walk along the length of the Minnis - the pastureland after which the village gets its name.

We were guided by Maxine Blades, her friend Barry (an expert on the windmill) and Gill Dixon. They and Andrew Barchi explained that the Minnis, a narrow flat piece of land around two miles long, some 400 feet in elevation above Canterbury, is privately owned but subject to rights of "estovers" and grazing (of livestock) for local people. There are also public rights over the many footpaths - all managed by a Board of Trustees of which Andrew is a member. For many years vegetation was kept down by the grazing; however, grazing has declined more recently, leading to the growth of trees and scrub.

After an hour or so of walking we arrived at the northern end of the Minnis and visited the now closed St Mary’s church at Stelling. As a religious site, this is thought to date from Roman times - though the present building is said to date in part from the 12th century. The church is listed in Simon Jenkins’ book “England's Thousand Best Churches”. It was reordered in 1790 in a non-conformist style and has box pews and a curious pulpit halfway down the north side of the nave. Opposite that there is a large arch in the south wall of the nave with a gallery behind it. The village it once served is thought to have disappeared following the Black Death in the mid-1300s.

Following this visit to the church we returned to the south end of the Minnis, where we had an excellent lunch at the “Rose and Crown”. After lunch, those who wished to do so enjoyed a tour of the windmill, guided by Barry.

The 8-sided "smock mill" is a grade 1 listed structure, built in 1866 by Holman Bros of Canterbury; it sits on the site of an earlier mill. The smock mill was in use until 1970. The growth of trees on the Minnis (following the reduction in grazing) affected the winds so, in 1923, a single cylinder Ruston Hornsby paraffin engine was installed and used as an alternative to the sails. We were told the miller was reluctant to use the engine because of the cost of fuel, although another reason for his reluctance may have been the difficulty in starting the engine: First you had to get the large bulb "red hot" with a blow torch, then wind the 4/5ft diameter flywheel backwards by hand (a two man job) and  then hope the explosion would cause the whole contraption to start running in the desired direction!

The mill is absolutely complete and is still capable of running; it is currently owned by Kent County Council and maintained by volunteers. There is a windlass operated by the sails to raise sacks of grain to the top of the mill. We were told that towards the end of its commercial operations, a boy employed to operate the windlass would jump onto the grainsack and go up with it, opening the trapdoors in the floors with his head or hands as he did so, to avoid having to climb the stairs!

There is now a small museum and tea shop attached to the mill which will be open to the public next summer. The mill is well worth seeing.

Those with long memories may recall the hilarious 1937 black & white film “Oh, Mr Porter” (starring comedic actor Will Hay - a film which was still being shown as a “B” picture in the early cinema-going years of some of us!) In the film the hero, on the trail of gun runners, gets into an 8-sided smock mill very like the one at Stelling Minnis (the actual mill shot in the film is at Terling in Essex). From memory, there is a good sequence of the working machinery - and of Will Hay being carried round by the sails*! (Barry told us that stopping the sails was one of the weaknesses of the design.)

Overall, our outing to Stelling Minnis was very interesting - and great fun too. Many thanks to Maxine, Barry, Andrew and Gill for their valuable input.

*For those wanting to watch the film again, it's currently available on youtube. The windmill clip mentioned above is at around 1:06:30 onwards. See here.

Picture: Some of the participants standing before the church at Stelling Minnis. Picture credit: Vic Pritchard/Rotary Club of Canterbury.