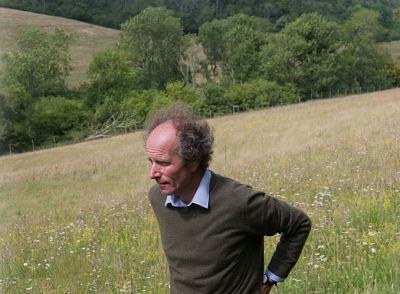 Natural England is the government’s adviser for the natural environment in England and aims to "help to protect and restore our natural world". It was great to hear from Dan Tuson about his work for the organization.

Dan has been interested in the countryside since he was a youngster, putting this down to going on long county walks with his mother and father. This interest took him to Silsoe Agricultural College in Bedfordshire where he achieved an MSc in Land Resource Management. After leaving college he worked for Kent County Council as an advisor; more recently Dan has been employed as a Farm Conservation Advisor with DEFRA and now works for Natural England.

Dan regularly contributesf articles and photographs to The Orchid magazine of the Kent Downs Area of Outstanding Beauty and he has written his own book – "The Kent Downs".

During his fascinating talk we learned that much of Dan's work is focused on creating new wildflower grasslands and meadows within the North Downs of Kent. Creating a new generation of wildflower grasslands and linking them up farm by farm is helping to restore wildlife habitats, increase insect numbers and so provide the food and resource for a wealth of wildlife: mammals, birds and reptiles.

We also learned that in many of these areas which are 20 to 30 years old the diversity of plant life is expanding to help create large networks of flower-rich habitat; this is helping both common and rare species [of flora and fauna]. The Duke of Burgundy butterfly for example, found only in the area of the downs between Wye and Canterbury, is increasing in numbers and colony sites. This year has seen numbers increase by 200% and new colonies have established on the newly created grasslands. We also learned that the small blue butterfly, also a scarce species, has appeared on one of the large grassland areas near Barham and now has a colony some 2-300 hundred strong!

Dan ended his talk by reminding us that building long term relationships with farms and helping them to access the countryside stewardship grant schemes is critical to the success of his work.

Dan was given a warm round of applause by Rotarians at the end of his presentation, with several asking pertinent questions about his work.

You can also learn more about Natural England here.

With thanks to Dan for helping with this article.