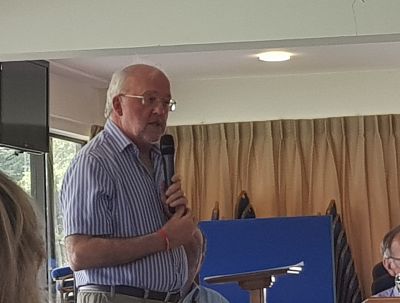 Rtn Paul Godfrey is a remarkable man. He has taken on the task of increasing awareness of a condition called APS, & through his fundraising efforts has helped raised thousands to support research. We welcomed Paul to our Club recently to speak about APS.

Paul’s late wife suffered from APS (antiphospholipid syndrome), and it was his personal experience with his wife that led Paul to want to spread awareness of APS and help find a cure. With these aims in mind, Paul has visited very many Rotary Clubs around the country telling members about the life-threatening condition. He has also walked from Land’s End to John o’ Groats to help raise funds.

Paul, who happens to be a member of the Rotary Club of Solihull, told us that APS - which affects both men and women - is an autoimmune condition which results in antiphospholipid antibodies that lead to what is commonly termed “sticky blood”. Previously named Hughes Syndrome after the rheumatologist Graham R.V. Hughes, the condition can cause a range of symptoms and problems – including blood clots, heart attacks, strokes and, in pregnant women, miscarriages. In fact, Paul informed us, APS is the most common treatable cause of miscarriage. The condition is currently incurable, which is why funds are needed for research and support. (For details about symptoms and more about the disease, visit the NHS site here.)

Paul’s talk was peppered with stories of those affected by APS. First, he spoke of a 27-year-old woman who had three miscarriages; if she’d been diagnosed early, she wouldn’t have had to suffer the trauma of multiple loss. Another woman was released from hospital after a lung biopsy, being told she needed no further tests. She continued to have health problems and a stroke; after further investigations, doctors discovered a mass of clots in her lungs. A couple suffered 13 miscarriages; luckily, the condition was eventually diagnosed and treated…and the couple went on to have a healthy baby girl. In effect, Paul told us, early diagnosis and treatment meant life could be significantly improved.

The symptoms of APS are often vague and similar to that of other conditions – e.g. joint pain, headaches – making diagnosis difficult. Moreover, having all of the symptoms might not mean the person has APS. This makes it all the more important that doctors know about the condition, i.e. how to recognise and treat it. Yet 37% of GPs know nothing about it. In fact, most health professionals lack awareness, meaning that the condition is both under-diagnosed and under-treated.

To return to Paul’s story: Paul’s wife was diagnosed with what doctors’ thought was multiple sclerosis (MS). However, in 2005 a consultant looked through her files and doubted the diagnosis. She was sent to Professor Hughes, who made the APS diagnosis. But, as Paul says, “it was 10 years too late”. His wife was already wheelchair bound. By 2014 she’d lost her voice and in 2015 she passed away.

Paul is now determined to improve awareness and training of doctors. He has raised £116,000 so far. An e-learning module has been developed and more than 400 doctors have already done the course. Paul’s raised funds mainly through walking. Where he may have expected to have a lovely long walk among daffodils and primroses, he has instead had to face fog, wind and bad weather – on top of which he has suffered sleep exhaustion, putting up with dodgy accommodation, and struggling with various injuries. At times he’s not been able to fulfil his plans because of his own health: as he puts it, “The spirit was willing but the body had other ideas!”

Fortunately for Paul, he used to work for the railways – which has helped his travel to various destinations around the country, "places both lovely and ugly". Bizarre things have held him up at times – for instance, at one point his travel was delayed thanks to a swan asleep on a track! He has now visited well over 100 Rotary clubs and plans 40 more this year. He’s travelled on 458 trains, 8 ferries, 3 planes, and has walked around 31,000 miles!

Recalling one trip to Westray Island in the Orkneys, Paul told us how he was asked if he was on holiday. After explaining, he was astonished when the response was “I saw Professor Hughes for APS!” On another occasion, one that clearly affected Paul, a young man spoke about his wife’s multiple miscarriages; naturally, Paul told him about APS. Paul assumes the young man spoke to the doctor. “In my heart,” Paul said, placing his hand on his chest, “I hope that his wife's condition was finally diagnosed...and I hope, perhaps, this helped her to become a mother. If so, all my journeys, all the struggles, would have been worthwhile”.

For more information about APS or to make a donation, click here.