Canterbury Rotarians enjoy a Taste of the East! 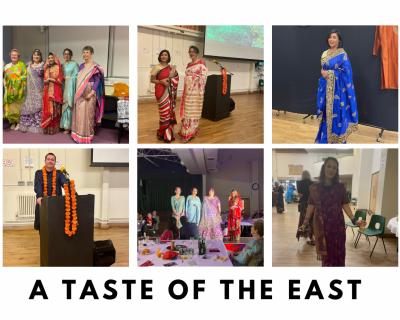 We are really pleased to have raised around £1500 for our charity account last night when we held a special "Taste of the East" event at Canterbury Academy.

Despite the changeable weather - which included torrential rain at one point - we managed to brighten up the late spring evening with a flavour, both literal and metaphorical, of the East. Nearly 90 Members and their guests came to the event which focussed on the Indian subcontinent and countries influenced by it.

Guests arrived in the main hall of the academy to a musical slideshow with sights including festivals, food, scenery and clothing from the subcontinent; there they enjoyed a mango lassi taster before taking their seats. Tables had a colourful arrangement of handpainted (upcycled) cans, tealights and marigolds. Each guest received a colourful favour and a "Taste of the East"-themed postcard to take home.

The optional dress code had suggested "bright and colourful" and many turned up wearing outfits they'd been gifted or bought while visiting the subcontinent or other countries "to the East". Several guests certainly had flowers in their hair!

After a brief welcome from President Stephen Thompson and handover to the MC for the evening, Crispin Rampling, guests heard a nostalgic poem written and presented by Julie Reza which set the scene for the rest of the event. In the backgound guests heard an instrumental version of Indian poet laurate Rabindranath Tagore’s song “Purano Sheh Din-er Kotha”, a evocative song written in 1885 that touches on a time of separation and the chance to unite once more. Fitting, perhaps, for the ability to meet up again after the difficulties of the last couple of years. (Interestingly, the music is said to have been inspired by Robert Burns’ tune for "Auld Lang Syne".)

Next up, PP Richard Kemball-Cook recounted some interesting anecdotes from his extensive travels in the region.

A musical interlude followed before a colourful fashion parade showcasing some outfits from across the subcontinent - including a kurtha pajama, shelwar kamiz and various saris. Richard wore a gho that had belonged to the late Colin McKone, a former member of our Club. Colin was working with the UN capital development fund, and Bhutan was his special area: he was given the gho when he retired. Other models included Julie, Sue Thompson, Shabana Raman, Lara Gurdulić, Judith Stephenson and Maxine Blades; lights and a/v were overseen by PP Phil Abbott and PP Martin Ward.

The second, bridalwear part of the show saw Shabana wearing a traditional red bridal sari, followed by two bridemaids, Julie and Anna, and finally by the Rotary Club of Canterbury Sunrise’s President Elect, Sinitta Nightingale, wearing her amazing purple and silver bridal lehenga. Parts of the bridalwear and their significance were described by the MC.

A raffle, led by PP Peter Hermitage and Crispin, was followed by a turban tying display by Paul, assisted by Anna’s son.

Stephen closed the evening with a vote of thanks and a warm round of applause for the event organisers and all who helped the evening go so smoothly. The event and raffle, which will be the last fundraiser organised by our current chair of fundraising, Dee Mepstead, raised around £1500 for our charity account and will be distributed to various local and international causes.

Picture: A composite of some of the pictures taken during the evening. Picure credit: Keji Moses/Rotary Club of Canterbury.