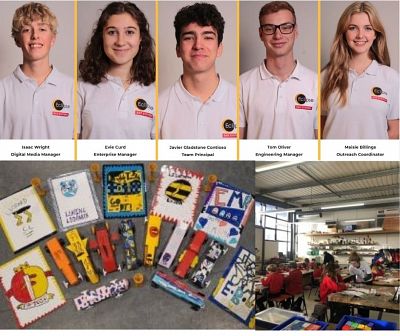 Science, Technology, Engineering & Mathematics (STEM) are essential for growth and development, so our Club supports STEM in various ways - including supporting one of the teams taking part in the F1 in Schools challenge. Here's a brief update on them...

Some years ago we supported a team from Queen Elizabeth's Grammar School in Faversham to take part in the F1 in Schools Challenge. That team, Team Evolve, went on to win the World Finals in 2019. Since then we have supported Team Eclipse. They are a great bunch of enthusiastic youngsters, and one of the things we like about them is that they, in turn, are trying to inspire younger students.

We recently received a copy of their Newsletter. The most thrilling thing for them has been their success in the 2021 National Finals. This means they will take part in the 2022 World Finals due to take place as a hybrid event later this year.

They have also held several Primary STEM days at the School's Technology department - an exciting chance for younger children to engage with STEM. Primary schools involved include Boughton and Ethelbert Road Primary Schools.

Together with other UK F1 in Schools teams they have collaborated to form "Team UK". For posts and promotion regarding that project, follow the hashtag #TEAMUK22.

Team Eclipse has also launched its website, through which you can find out all about the team, their work and their sponsors: www.eclipse-gb.com