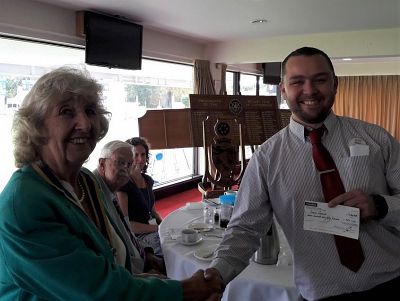 It was a delight during a recent meeting for us to hand over a cheque for £750.00 to Sean MacMahon, one of the managers from Tesco Metro in Whitefriars, Canterbury; the funds will go to their chosen charity (Cancer Research UK).

As agreed with the store, the money is 50% of the funds that we received via our Wishing Well (which regular readers will be aware of).

After its stint at Tesco Metro in Canterbury, and thanks to PP Robert Yonge and Rtn Deborah Connolly, the bright yellow wishing well has now moved to the big Sainsbury's (in Kingsmead Road, Canterbury) where we hope you'll give more of your unwanted change a spin.

We're grateful to the staff and customers of both Tesco and Sainsbury's for their support with the Wishing Well.