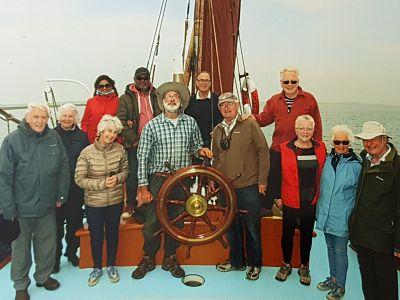 On a windy, somewhat damp day a group of intrepid Rotarians and partners embarked at Harty Ferry for a Thames Barge trip along the Faversham Creek.

"The varied party ranged from some serious sailors (PPs Richard Kemble-Cook and Alastair Scott) to complete landlubbers (President Elect Alan Mepstead) and all categories between. The first hurdle was to wade out to the tender to take us to the barge, with the more savvy wearing Wellington boots and the innocents in flip flops. Among some hilarity we all arrived safely on the MS Mirosa.

The MS Mirosa was built in 1892 and being based in Colchester she originally carried hay, timber and general cargo along the English coast. She is still powered solely by sail and is one of the last barges not to be fitted with an engine.

Coffee and croissants were provided and enjoyed in the warmth and comfort below deck and as the wind had dropped we were then treated to the sight of Richard and Alastair helping to man the oars so that the barge could eventually catch the wind and get under way. We headed off towards Sheerness and were all impressed by the total sense of calm and tranquillity all around us. The landlubber discovered that the water was in fact rather wonderful.

After lunch our 'able seamen' assisted the regular crew to turn the sails round (probably not the correct nautical term) and we proceeded back to Harty Ferry. Tea and scones on board finished a memorable trip, apart from the hazards of getting back in the tender and then wading back to shore.

The day ended with a very pleasant dinner at the Three Mariners in Ore.

This was the sixth-or-so trip on the Thames Barge that Rtn Brian Dobinson has organised and our thanks to him & others that helped us have such a nice time. Can we do it again please Brian?