Thanks from The Lord Mayor of Canterbury's Christmas Gift Fund 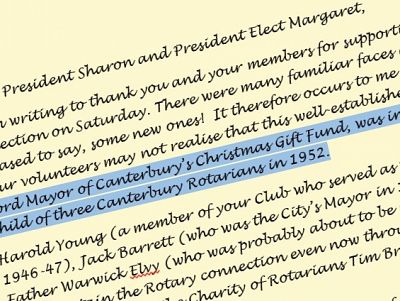 It was lovely to receive a thank you from the Fund...and learn about Rotary's involvement from the start!

Our President and President-Elect had a lovely letter from Sheila Cragg, Chairman of the Lord Mayor of Canterbury’s Christmas Gift Fund, for our Club's help with their street collection. The total collection for the day finished, after adjustments, at £829. This will fund around 27 grocery parcels from the 500 that the Fund will provide this year. Well done to all those who were out in the cold and also thanks to those who dropped their coins and notes into the collecting tins.

While reflecting on the "many familiar faces and.... some new ones" in her letter, Sheila took time to remind us that this well-established local charity (the Lord Mayor of Canterbury’s Christmas Gift Fund) was in fact the brain-child of three Canterbury Rotarians in 1952 - namely Harold Young (a member of our Club who served as RIBI President in 1946-47), Jack Barrett (who was also the City’s Mayor in 1952) and Warwick Elvy (who became a Rotarian).

The Fund still maintains the Rotary connection through the active participation of three of our Club's members: Tim Brett, Tony Loughran and Stephen Thompson.

Sheila reminded us that the Fund is a local charity, run by local people, for the benefit of local Canterbury residents and kindly invited everyone to join them on Christmas Eve when they will be holding Open Air Carols at 6.15 pm in Rose Square, Canterbury. What better way to enter the Christmas spirit?!

Picture: An extract of the letter from the Chairman (reproduced with kind permission).

The Lord Mayor of Canterbury’s Christmas Gift Fund is a registered charity and can accept donations online.