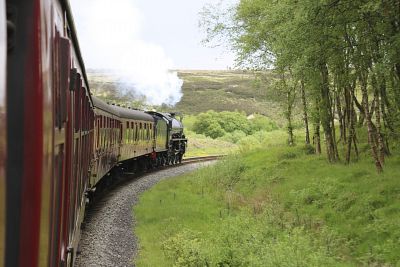 Part of a series of articles about our Members, helping you to know more about the things that we do when we're not doing Rotary activities! Here, a Member talks about her love of trains.

I think it must be inherited. My father, when he was home from sea, enjoyed watching trains – steam trains in those days. He would often take me with him to stand on a bridge to be enveloped regularly by smoke and noise in an afternoon away from my mother and sister. I still love trains, and they seem to have been a constant moving force in me, leading to new lives and adventures.

Once we moved down to Kent, there were two railway adventures ahead – one the Golden Arrow, powering out of Dover Marine station in the late afternoon, and the other the Romney, Hythe and Dymchurch Railway.

For the first, my parents would pick me up from school, drive to Dover, and walk along the long corridor which connected the road to the station. The Pullman train would be waiting in the station, ready for its glamorous passengers to come off the ferry from Calais and be transported in old-world comfort to London. The carriages all had names, often from classical mythology, pretty shaded lamps on the tables and painted the brown and cream of the service.  We would wander along admiring this exotic world, but a few minutes before it was due to depart, we would rush to reposition ourselves outside where we could see the engine with its Union Jack and Tricolour flags prepare to move.  I can still hear the steam and clanking as it started up, and feel the speed as it passed us.

The miniature railway was so different – slow, domestic, full of families out for fun. We would go to Hythe, admire the engines, and then my sister and I would be put on the train, my parents would drive to Botolph's Bridge and wave to us as we passed on the way to New Romney - where we would be picked up and head for a picnic site near the railway.

Since then I have, of course, travelled the railway with my children and grandchildren and relived those memories.

Read about the Golden Arrow here.

The Romney, Hythe and Dymchurch Railway is temporarily closed - but you can plan your next trip here.