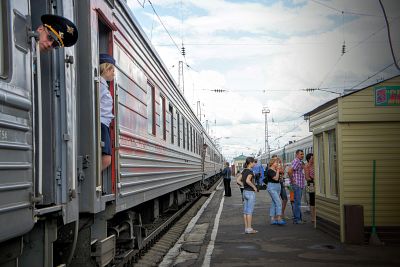 Our members often have some very interesting stories to tell, so it was a great pleasure to hear from our Speakers’ Secretary, Rosemary Doyle, when our scheduled speaker was unable to attend the other day. Rosemary spoke of an unusual rail journey.

Illustrated with a lovely collection of pictures that were taken at the time with her Mamiya Sekor SLR, Rosemary took us on a trip all the way from Brussels through to the Russian city of Irkutsk, the first leg of her rail journey.

Back then Rosemary was living in Brussels - as her husband had worked at the EU - when a good friend suggested travelling from Brussels all the way to Hanoi by train. The friend, who disliked flying, wished to visit her daughter who was working in Hanoi. The entire journey wasn't possible by train at the time as the Chinese/Vietnamese border was closed, so the two friends decided to travel far as Hong Kong by train, and then fly the rest of the way.

Starting in April 1996, the first major stop on their trip was Moscow, the capital of Russia. The excursion to Moscow took nearly three days, travelling right through Germany and then through Poland. The friends were in a compartment for two, with an upstairs bunk. Nights, we learned, were quite comfortable - apart from being woken up for the German/Polish border for passport checks.

The overwhelming impression they had as they passed through Poland was that of a brown landscape – spring had not yet arrived and everything looked dead. The stewards – both Russian – kept them entertained with questions (conducted largely in sign language) about Prince Charles' marriage!

At the border with Russia the bogies under the carriages had to be changed due to the difference in rail gauge between Russia and the rest of the continent. This entailed each carriage being lifted hydraulically to remove one set of wheels which were then substituted with another set. Quite a task, which the friends watched in awe!

Arriving in Moscow, the friends were shown around the city by guides and interpreters supplied by the Russian Foreign Ministry (Rosemary’s friend’s husband worked with them on the EU Phare programme of aid to Eastern Europe). While there, they visited the historical monasteries of Zagorsk and learned about the mysteries of the Kremlin, a series of buildings rather like Whitehall, with its own Cathedral, and the splendid Armoury Museum.

After three days experiencing the sights and sounds of Moscow, the friends boarded the Trans-Siberian railway - a railway which runs from Moscow all the way through to Vladivostok. At a distance of over 9,000 kilometres, it's often said to be the longest rail journey in the world (although strictly speaking, that's not true).

On entering their train compartment, the two friends were impressed by its cleanliness as well as that of the bathroom at the end of the corridor. They were less impressed, however, by the restaurant car which, while it had a very lengthy menu, only actually had two meal choices available. The second time they went there the menu had reduced to no choice at all! Nevertheless, they enjoyed using the large samovar situated at the end of each carriage to make their own packet soup and hot chocolate that they had brought with them for the trip. They even made an attempt at poaching an egg, purchased on the platform at one stop - although that turned out hard-boiled!

They passed the time during the journey reading books and watching the scenery, having declined the offer of a television for hire at the beginning of the trip. The vastness of the country soon became apparent. The long distances between towns, the extent of the birch forests, and the curious lack of lights at night in the towns gave an insight into the lives of those Russians that lived in the rural areas of the country, and conveyed a sense of how distant they were from Moscow.

This first leg of their rail journey ended in Irkutsk, nicknamed the "Paris of Siberia" because of its "liveliness", after four long nights. There, they left the train in the early hours of the morning. After exploring the city, they went down to stay at Listvyanka by the shores of Lake Baikal. Here they were able to walk on the vast waters of the still frozen lake! Walking back to the hotel they heard music and came across a group of Russian army officers and their wives; the two friends were invited to join their picnic. One delicacy that Rosemary recalled being on offer was omul, an oily fish from the lake, salted. They all chatted together using a mixture of English, Russian and German; Rosemary remembers there was particular interest in the cost of the journey. When Rosemary asked if she could take a photo of them, the men all melted away - leaving their wives to be photographed.

After returning to Irkutsk, Rosemary and her friend boarded the Trans-Manchurian train - the next part of their exciting adventure. Rosemary promised to tell us about the second leg of their extraordinary journey in the near future!

With thanks to Rosemary for her help with this article.