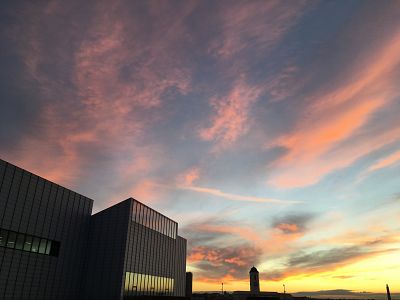 A Canterbury Rotary Group spent an informative and enjoyable day at the end of October at the Turner Contemporary, in Margate, visiting the four exhibitions by artists on the shortlist to win this year's Turner Prize.

It is an exciting time for the Gallery - this year will be the first time that the Turner Prize will be presented from there. This year’s finalists include Lawrence Abu Hamdan, Helen Cammock, Oscar Murillo and Tai Shani. Using audio-visuals, Lawrence's work explores ‘the politics of listening’. Helen uses photography, video, print and performance in her artwork. Oscar also uses a variety of techniques in his artwork, including sculptural techniques, as does Tai, although Tai's sculptural installations are very different to Oscar's. For those unfamiliar with the Gallery, it is a large, modern building with design by David Chipperfield, which sits beside Margate seafront. It is named, of course, after the renowned artist J.W, Turner, who once studied and lived in Margate. The Gallery was opened in 2011, with artist Tracey Emin being vocal in her support for it.

Our visitors were ably looked after during their trip by the Gallery's Head of Development, Sanjivan Kohli. Over coffee Sanjivan told them about the Gallery's aims (greater outreach and intensified work with bodies such as education and health authorities) and its finances (great support from Kent County Council and other public authorities, but cutbacks in times of austerity; increasing reliance on private institutions and individuals). The group also had an interesting discussion about the trend towards multi-media art presentations in art exhibitions - all of the four exhibitions in the Gallery falling into this category in different ways.

The visitors went around two of the exhibitions with local school children as guides - an unusual experience that formed part of the Gallery's educational outreach activities. The youngsters had previously gone around with boards, writing down their reactions to various exhibits, which they then conveyed to our group.

Next, our visitors dipped into the other two exhibitions. Reactions were varied, everyone had different opinions. Sanjivan told the group that if they went around the exhibitions and listened to all the commentaries or films connected with exhibits, they would need around ten hours! Anyway, the group saw and heard plenty to allow them to make their own judgements about which artist should win the Turner Prize. The official prize-winner will be announced at a ceremonial dinner broadcast live from Margate on BBC1 on 6 December. It is nice for those of us who live in Kent to know that the artistic world will be looking in on us, thanks to having the Gallery in this part of the country.

In the afternoon, a walk through the old town took the group to the Carl Freedman Gallery - a private gallery selling art works over most parts of the world. It had sold up its small London premises and gained in Margate a huge floor space, allowing for three adjoining exhibition rooms, numerous offices, a pleasant hospitality area and a sizable print-making hall. We enjoyed its current exhibition called "Gossamer", consisting of sculptures and beautiful coloured picture assemblies using stockings or tights - a genre first practised by a lady sculptor injured in a fall from a roof and no longer able to lift heavy weights.

The visitors were treated to yet another bonus when on the way back to the Turner Gallery for a final cup of tea - a splendid Turner sunset, viewed from the site where the building housing Turner himself (and his landlady) had once stood!

For more about the Turner Contemporary and the Turner Prize 2019, click here.

With many thanks to Alan Forrest for drafting this article.