Our Members' hobbies - my Velocette 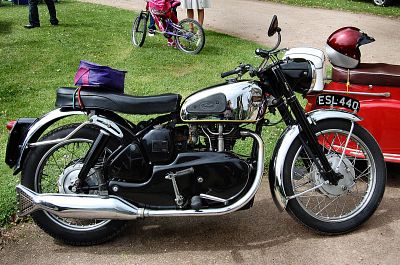 Part of a series of articles about our Members, helping you to know more about the things that we're interested in when we're not doing Rotary activities! Here, a Member talks about his beloved Velocette motorcycle.

When I was around 20 and working as an articled pupil with Liverpool City Council (who paid all my fees at university and also paid me during the holidays), I bought a Velocette MOV 250cc motorbike so that I could go to work through the Mersey tunnel. My Dad was very keen; my Mum was not!
I met a fellow Velocette owner on the same course as me, John. He and I formed a good friendship, and we soon joined the Merseyside sand racing fixtures (there were five per annum at New Brighton, Southport, Bootle, Oulton Park and another venue that I've forgotten now). I would go in his "sidecar". The bike was great, very fast, but the "sidecar" was just an old door really - with the door handle still on! During races I got far closer with that handle than I'd like to have!
John and I did well in the races because the Velocette (Velo) had a valve lift. This meant that we could, at the start, get the bike onto the compression stroke. Then, as soon as we pushed off, the bike would fire. We'd often be first to the first corner - but soon we'd overtaken on the straight, usually by a beautiful BMW with a shaft drive to the rear wheel and the sidecar wheel. We usually came second to that bike, but we always made a complaint that it wasn't a standard bike and said we should be given first place. We never succeeded - but we did form a great friendship
with the riders!
We were often found working on our bikes. Carburettors usually needed tweaking to push the correct air/petrol mix into the engine, and we were always polishing the valves and tweaking the carburettor to make the bike go faster. I remember that my Dad would walk past our workshop muttering -- "polishing the ports again Andrew?"
As poor students, John and I would often go into the Velocette central shop in Liverpool to cadge cheap bits for our (by now four) bikes. By this time I was racing a Velocette Viper while John raced a big Velocette Venom (with a max. speed of 125 mph - although we could only achieve 90 mph on the sand).
While we were in the shop one day, no doubt being a bit of a nuisance (well liked though), the owner came in wearing his suit & tie (they sold Austins and Morrises next door). A little agitated, he said " Old Bert is on his way in". Bert was a 50-year-old gent who'd bought a high performance bike and sports sidecar. In his early days Velos were the tops, winning The Isle of Man races for many years with KCC & the KSS Velocette bikes (well known and loved in biker circles). Bert had a big Venom (with a blacked out sidecar and a wraparound chrome bumper), worth around £1000, which was not going well. There was nothing wrong with Bert's bike - but he just never let it out at speed. This meant that the valves and the carburettor would fur up with carbon deposits, slowing the bike down and affecting its pick up. High performance bikes (and cars) need to be driven fast and hard to keep performance up to maker's standards. So the boss's concern was that the bike needed to be run hard and fast to burn off the carbon deposits in the engine.
We were asked to take Bert for a coffee for an hour or so while Fred, the mechanic, took the bike out on the East Lancashire Road to Manchester. Fred was to drive the bike to Manchester at 95 mph in third (in those days you could go very fast on derestricted roads), go round the roundabout and come back in top gear and at the top speed of 125 mph. Fred was then to drop down to the Dock Road in Bootle, "battering" the bike on the cobbles and bumps before bringing it back. So Fred did just that - you could smell the bike as it came back in. "There you are Bert," said Fred, "I've sorted it out and you'll have no more poor performance". Bert gave his thanks and walked around to the sidecar. "I'll just see how Mother is," he said, lifting the hood. And there was his Mother! "Ooh," she said "he did go fast!" We all burst out laughing - except Fred who was mortified. He had no idea that Bert's Mum was in the sidecar.
While living in Liverpool I often went out in the evenings on my Velocette, sometimes to the famous Cavern Club. But we'd give it a miss if the Beatles were playing because we thought they weren't very good! However, after their trip to Germany we realized how wrong we were and went along quite often. I was a big fan of Cilla Black and Gerry & the Pacemakers. I even dealt with a Clean Air grant with one of the Beatles' parents - but now I can't remember which one!
Since then life has moved on. The Beatles went on to be one of the most famous bands in the world, joining the Rock & Roll Hall of Fame; I qualified and went to live in Wellington, Shropshire. But I still enjoy looking back on those exhilarating old days!

Learn about the Velocette Owners Club and history here.