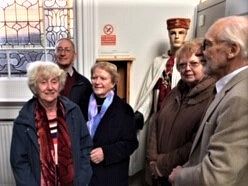 In our quest to explore new and interesting places in and around Canterbury and Kent, a group of around 20 of our members and their partners visited the Kent Museum of Freemasonry at the end of September.

The public perception of Freemasonary is of a world of secrecy and mystery, so it was fascinating to have some insight into Freemasonry by visiting the Museum - which is located in the heart of Canterbury, just opposite Westgate Gardens. By no means can the Museum said to be new - it was officially opened in 1933. Nevetherless, it was new to most of us.

Our members were given a very interesting introduction to the origins of Freemasonry and its development through to the present day. We were told that we shouldn't believe what we see on television, much of which is very far from reality - although our guide did (jokingly) say that if he gave away too many secrets then he would have to do away with us!

We then toured the Museum with two of the curators on hand to answer our many questions. The Museum is a hidden treasure which boasts a rare collection of exhibits of national and international importance, said to probably be the finest outside of London. There were plenty of artefacts, books, documents and regalia on display.

Our thanks to the guides who were generous both with their time and information.

To learn more about the Museum, which is an Arts Council accredited museum, click here.

Picture: Some of the visitors at the Museum. Picture credit: Alan Mepstead, Rotary Club of Canterbury.

With thanks to President Elect Alan Mepstead for the draft article.