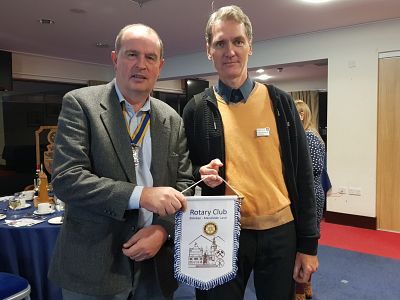 Yet again we were delighted to welcome a Rotarian from overseas to one of our meetings - this time a visitor from the Rotary Club of Eisleben-Mansfelder Land in Germany.

Eisleben, in the District of Mansfelder Land, is a town renowned for its association with Reformation priest Martin Luther - so it has some similarities with Canterbury in having an interesting religious history. Our visitor, Ulrich Franke, is a pharmacist who is currently visiting England for four weeks in order to improve his English with a view to, perhaps, travelling to Australia in the future.

Ulrich presented our President, Neil Fraser, with a pennant from his club and passed on his greetings on behalf of his club to our members. He told us that his club has around 30 members with a variety of professions (one, a baker, proves very popular at club events because of his delicious cakes!) Their club has a number of activities, including a Rotary Youth Exchange Programme in which an 'outbound' youngster visits another country while an 'inbound' youngster visits them. They have hosted a number of such visitors, e.g. from Mexico, Taiwan and Brazil. Like us, his club also supports the local youth club. Recently, they've also been supporting a local kindergarden. Ulrich also told us briefly about the town where he's from - Halle. Halle is the birthplace of George Frederic Handel (the composer known for his 'Messiah' and 'Water Music' compositions and who later became British). Wilhelm Bach also lived there and his house remains to this day - now a museum. (Halle also has a number of other historically significant buildings and features such as the Gobel Fountain. One of its most photographed sites is 'The Illusion Wall', a huge mural painted by Hans-Joachim Triebsch.)

Members of our club gave Ulrich a warm round of applause and on our behalf our President invited him to visit again!

Picture: Ulrich presents our President Neil with a pennant at our evening meeting. Picture credit: Rotary Club of Canterbury.