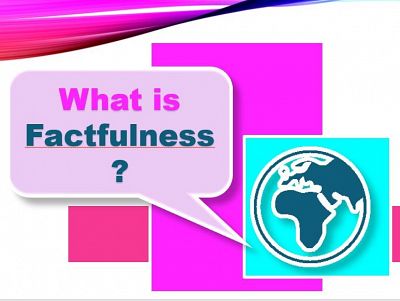 When PP Viv Pritchard talked to members recently about 'Factfulness', based on Hans Rosling's book, many of our members found themselves surprised, with many of their pre-conceived ideas challenged.

Rosling was a Swedish physician with an interest in Global Health and statistics; readers may be familiar with him from various TV and media appearances about statistics. "Factfulness" is a book, published in 2018, that he wrote with his statistician son and daughter-in-law. Bill Gates referred to the book as "One of the most important" books he's ever read.

Viv used the book as the basis for his talk. He started by telling us that "factfulness" - the condition of being factful - is defined in Rosling's book as: “The stress-reducing habit of only carrying opinions for which you have strong supporting facts.” Viv then went on to challenge members with a quiz from the book. Questions included:

Many of the correct answers to the quiz were greeted with expressions of surprise from the audience - and Viv consoled all by saying "you're not alone if you did badly"! It turns out that Rosling has conducted the survey around the world and "everyone did badly", with an average score of 4!

Viv then showed us a 2009 video about global changes over the years, narrated by Rosling, which made interesing viewing. Dynamic charts showed how life expectancy, health and income changed in different regions of the world with time. In the video, Rosling concludes that it was really the last 200 years that has changed the world.**

Viv cited a number of reasons for getting things wrong:

Viv went on to describe why facts are important - notably:

Viv encouraged us to challenge assertions and demand facts - and to also challenge our own prejudices.

In concluding his talk, Viv stated that there is too much poverty, deprivation and inequality in the world BUT the world is not as bad as most people think. The world is getting better - slowly.

*You can find all 13 quiz questions with detailed answers here.

**A number of videos, including "200 years that changed the world" can be found here.