A bit of fun and fundraising: Who is that baby? 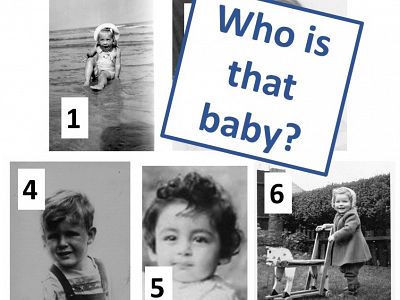 At stressful times such as the current one it's really good to have a little bit of fun - and this is what we had recently thanks to a little photo competition among our Members. And we raised a little bit of money too, which was great news!

Recently, one of our Members had the idea to hold a photo competition among members for a little bit of fun. At the same time, she hoped to raise a little bit of money towards a target that she has set herself for fundraising towards a Rotary Global Grant that our Club is jointly applying for with an overseas Rotary Club.

She asked our Members (and their spouses) to send her a picture of themselves as a baby or young child - managing to collect 16 pictures all together. Editing each to make it black & white and remove background clues, she compiled the pictures into a collage. The challenge was to identify each baby. Four random pictures of well-known politicians were added as red herrings. There were plenty of angelic faces, dimples and cute smiles on display!

Members/their spouses sent in their answers by email, and at our meeting on Tuesday we learned the answers as we each tried to guess the photos shown to us on screen during the Zoom meeting. It seems that some of our Members were easy to guess as "they haven't changed at all" while, worryingly, others got mistaken for politicians Donald Trump, Boris Johnson, Jeremy Corbyn and John F Kennedy! A final picture that hadn't been sent out - of a young boy sitting on the bonnet of a car - had members perplexed - until a hint was given that the car should have a blue light, and everyone recognised our Past President, Peter Hemitage!

First prize of a wine bottle went to Pauline Pritchard, 2nd prize (chocolates) to her husband Viv, and 3rd (more chocolates) went to Peter himself! The competition raised £55 too, but it was the fun and laughter that was the best outcome!

We thoroughly recommend holding a little competition such as this as a fun activity among people who are members of the same club, group or workplace - something that can be done socially distanced, but that brings everyone together too!

Picture: Some of the pictures in the competition. Picture credit: Rotary Club of Canterbury, Kent, UK