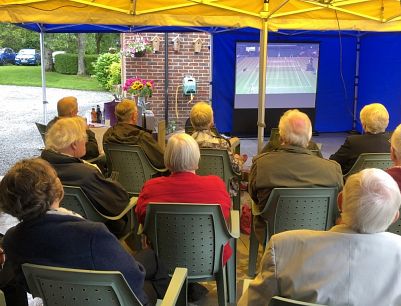 Watching sport together has its joys, no matter who you support. Several of our Members had a great time together on Saturday watching the Ladies' Final at Wimbledon, with profits going to PolioPlus.

Twenty eight of our Rotarians and their family members met face-to-face for the first time since Lockdown forced the club to meet via Zoom to watch the Ladies' Final on a giant screen in the garden of our new President, Stephen Thompson. It proved to be an exciting match between the world number one, Australian Ashleigh Barty, and the 29-year old Czech Karolina Pliskova (after the latter had quite a nervous start).

A delicious strawberry tea (including a little fizz and the traditional strawberries and cream) was served by Stephen and his wife following the match. All-in-all the event, which marks the first in a series of social events planned for our Members, proved a great way to watch the game and a marvellous opportunity to catch up with Rotarian friends and family while raising some funds for PolioPlus.

UPDATE: The event raised £160 for PolioPlus.

Thanks to "Abbott Enterprises" who provided chairs and equipment and to Maxine Blades for providing draft text.