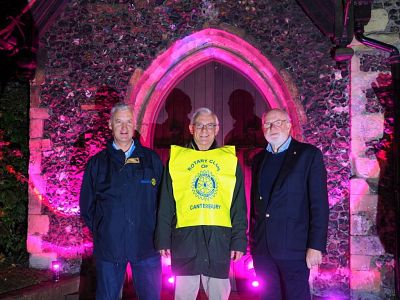 Today is World Polio Day and an opportunity for Rotarians to raise awareness of this disease and of Rotary's efforts over the last 30 years to help eradicate it. Once present  in 125 countries around the world, including here in the UK, the number of countries that still have cases of wild type polio is now just two – Pakistan and Afghanistan.

Rotary worldwide has spearheaded the battle against the viral disease through mass immunisation and health education programmes. The Bill & Melinda Gates Foundation generously matches every pound raised by Rotary with two from the Foundation. Vaccinations programmes and awareness-raising is essential to keep case numbers in decline.

As last year, the lighting itself was overseen by PP Phil Abbott (a Past President of Canterbury and a past Member of Canterbury Sunrise). Thankfully, the weather was not blustery like last year; moreover this year the Rotarians did not have to contend with lockdown restrictions; a clear and calm evening allowed the Members to gather together. They were also joined by ADG Kevin Fielding. There was also a little surprise in store for one of our members - but more about that tomorrow.

The colour purple, in case you wondered, is inspired by the colour of the dye painted on a child’s little finger to signify they have received their potentially life-saving polio vaccine and has come to symbolise the fight against polio.