Fun-raising & fundraising at our 2017 Christmas Party! 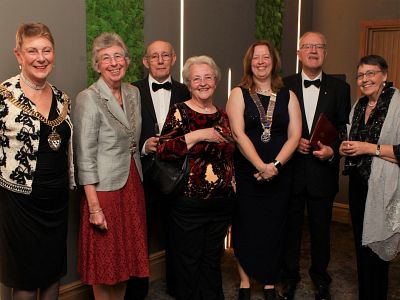 Just to prove that our fundraising doesn’t stop even when we’re having fun, we’re delighted to report that we raised a total of £730 from our Christmas Party on Saturday night.

We raised £590 on the raffle and £140 on the auction, with prizes supplied and the auction carried out by Past President Geoff Goodban. The funds we’ve raised will go towards the President's two charities, Scat Bone Cancer Trust and the Kent, Surrey & Sussex Air Ambulance Trust.

The black-tie party was held at the Darwin Conference Suite at the University of Kent at Canterbury and was well attended by Rotarians and their guests. Guest Speaker and Honorary Member of the Club, The Right Reverend and Right Honourable Lord Carey of Clifton and Lady Eileen attended the event, as did the Lord Mayor of Canterbury, Rosemary Doyle (also a Club member), Lady Mayoress Jenny Yonge and Assistant District Governor Hilary Brian.

We were entertained by the delightful group Cameo Opera, who showed their versatile skills with operatic songs, songs from favourite musicals, and of course lovely Christmas Carols. There was even some audience participation with jingling from the floor (at the request of the singers) to the tune of ‘Jingle Bells”!

Lord Carey gave a brief speech, as did President Sharon. But the moment of the evening had to be when Rtn Marjorie Lyle (our first female Rotarian, who also celebrated her 10th year at the club this year) was honoured as a Paul Harris Fellow. Taken by surprise on opening the special certificate and pin, Marjorie let out a lovely ‘Whoo hoo”. Our heartiest congratulations to her.

Many thanks to Rtns Wendy Jones, Robert Boyd-Howell, Neil Fraser and of course President Sharon for arranging the event, and to the caterers and staff for doing such a great job of looking after us.