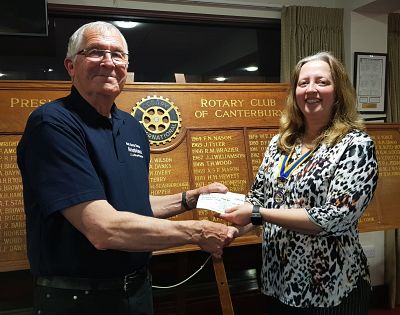 For those that are unfamiliar with its work, the Kent Surrey Sussex Air Ambulance Trust (KSS Air Ambulance) provides a Helicopter Emergency Medical Service (HEMS) that can respond to patients who have suffered trauma or serious medical emergencies.

The charity (formerly known as the Kent Air Ambulance) is one of President Sharon Jordan’s two main charities. Paul, a volunteer for KSS Air Ambulance with a background in motorsport and medical rescue work, started his talk with thanks for our support to date.

The biggest advantage of the air ambulance is that it can cut the time needed to respond to an emergency by bypassing traffic. However, in recent years the service has also started to provide more medical treatment options on site. So it’s important to remember the air ambulance is NOT just another ambulance (a point illustrated for us humorously with a picture of a flying ambulance!) The service brings something very different to medical emergencies.

KSS Air Ambulance operates two helicopters from Redhill (it used to operate from Marden but was unable to continue operating from there as it didn’t have the land access it needed for its newer, larger aircraft). The service is in the process of moving back to Rochester and a new headquarters is being built there. Redhill will serve as a hub, and has been expanded lately to improve training etc.

KSS Air Ambulance runs more than 2,000 missions per year (approx. 6-8 flights per day), with HEMS operating 24 hours a day, 7 days a week thanks to a shift system. It will come as no surprise to most that the service is mainly used for road traffic collisions (RTCs). Around 42% of missions are for RTCs; 25% are for accidental injuries, 11% for medical problems and 5% for sport/leisure related injuries.

Accidental injuries include those that result from all sorts of domestic incidents (e.g. stair falls to DIY-related incidents). Common medical problems include heart attacks, stroke, asthma – all of which are life threatening and time critical, and which require patients to go to the best facility available. Sport related injuries can be the results of anything from children’s accidents at primary school to professional/Olympic level sports.

Calls to KSS Air Ambulance come via 999. Around 2,000 calls are received per day at the call centre. HEMS has its own dispatch centre – which screens calls and dispatches the helicopter as needed. Dispatchers liaise closely with other emergency services and in fact KSS Air Ambulance teams work very closely with highly skilled paramedics from SECAmb, the South East Coast Ambulance Service. After a call comes in, KSS Air Ambulance aims to be in the air within four minutes.

Each KSS Air Ambulance flight will have a doctor and a paramedic on board (this doesn’t apply to all air ambulances in the country). Doctors are employed for one year and receive their salary from their NHS Trust. They tend to be consultants or within two years of being consultant grade; most are specialists in areas such as anaesthetics or emergency medicine.

Paramedics used to come from SECAmb, but now they are permanent staff members. They all have at least eight years’ experience in the field and are accustomed to a ‘pre-hospital’ environment.

Of course each flight also has its aviation crew. Many of the pilots are either former members of the police or the military. They need to have a lot of flying experience, and be able to make decisions on when and where to land in stressful situations. They also need to be able to fly at night, which is far harder than daytime. In fact any mission has potential dangers. A sober reminder of this is the tragedy at Bluebell Hill in 1998 when the KSS Air Ambulance lost a crew of three when their helicopter collided with power cables and subsequently burst into flames.

There are currently two aircraft: An MD 902 Explorer, which KSS Air Ambulance has had for around 20 years, and more recently an AW 169 Augusta.

The Explorer, though fully functional, has limited cabin space; it’s also very stuffy in hot weather. It has very little room for the medical team to carry out interventions, which means the medical team has to try and do as much as possible on the ground before the patient is flown to hospital – otherwise there may need to be a landing on route. There is also little room for a parent to accompany an injured child.

The Augusta was custom developed for KSS Air Ambulance over a period of more than two years. It is far roomier and gives the team almost 360 degree access to patients. Loading patients is also easier and quicker – which is good for adverse weather conditions. It also has latest navigation equipment; in fact some functions can be programmed, although a pilot is always there. Aircraft availability by day is 98%, by night it drops to 85% because of the trickier conditions. In some rare circumstances the team may need to respond by car – but this is obviously slower.

In recent years KSS Air Ambulance has been able to administer anaesthesia outside the hospital environment – something that the ambulance service cannot do. This allows the medical team to take over control of patients with, for example, serious head injuries. It also means the risk of secondary brain injury can be reduced and blocked airways etc. can be treated at the scene.

The service carries four units of O-negative (universal donor) blood at all times, 24/7. This blood is changed on a daily basis thanks to SERV, which carries blood supplies back and forth. KSS Air Ambulance also carries plasma on board.

Patients may be situated anywhere within the three counties and may need to be flown to any of a number of hospitals, including Brighton, London and Southampton; patients may be flown to major trauma centres where the full range of medical expertise is available under one roof.

Over the last few years there have been major changes for KSS Air. In 2005 it first started to carry doctors. In 2007 the service (then Kent) expanded to Surrey and Sussex. They have carried blood on board since 2013, the same year they launched a 24 hour service.

Paul gave us a few examples of people who’ve been helped by the service. Jim, for instance, received serious head and facial injuries after coming off his bicycle and was close to going into a coma. The doctor was able to start dealing with his brain injury with interventions only normally available in A&E. He was flown by air ambulance to a London hospital where he received further treatment. While in recovery his wife, who was heavily pregnant, gave birth to a baby that Jim didn’t meet until around four weeks later; he was still wheelchair bound. He has since recovered enough to take part in the Brighton Marathon. His wife credits the service for allowing them to be the family they are today. Jim himself says "Without them [the air ambulance], our life would be so different … A handshake was not enough”.

The helicopters are too costly to purchase (around £9 million); instead they are leased. Nevertheless the service is very costly to run – the average cost of a mission is around £2,500. Each kit bag costs £365 and boots cost £75. Consumables need to be purchased – this even includes bubble wrap, which is used to keep patients warm. The service needs to generate more than £6.5 million each year.

Paul reminded us that the charity is very reliant on public support and it receives no lottery funding. Nevertheless it runs its own lottery and many volunteers and others help with fundraising (for instance, Trustee Paul Barrett donated a car for a raffle, while others run marathons, hold coffee morning etc). Some people leave money in their wills – such legacy gifts are very important. The charity relies on members of the public not just to help with fundraising but also to spread awareness about the charity, its need to raise funds, and just how much difference KSS Air Ambulance makes.

At the end of Paul’s talk President Sharon donated £500 to KSS Air Ambulance on behalf of our club.

If you want to know more about the Kent Surrey Sussex Air Ambulance, how you can help or how you can donate, then please visit the website.