One of the objects of Rotary is: "The advancement of International understanding, goodwill and peace through a world fellowship of business and professional persons united in the ideal of service".

The Rotary Club of Canterbury has established contact Clubs in four European Countries: France (St Quentin), Belgium (Leuven), Germany (Lüdenscheid) and Holland (Leiden*) and meet each year by rotation in one of the five countries in the spring. This is the largest grouping of contact clubs in RIBI District 1120 and very strong friendships have been established between members over the years.

*Since 2010 Leiden has replaced Utrecht as the Pentangular contact club; see below for more details.

The roots of Pentangular go back to just after the Second World War, before St Quentin even had a Rotary Club. The Canterbury Club had already established links with the northern French town as part of the post–war reconstruction that was taking hold throughout Europe. In St Quentin's case this was more political and social than bricks and mortar as the town had escaped the devastation it suffered during the first-world war. Against the background this exisiting relationship it was natural, under the presidency of John Thompson, that when the St Quentin Rotary Club was chartered in 1947, a formal relationship should be established between the two clubs.

It was the St Quentin club that advanced the notion of wider international relationships and in 1955, the French made contact with the Rotary Club of Utrecht in Holland. Any thoughts, though, of a quick formalising of this relationship were complicated by the fact that Utrecht already had an international contact club in the shape of Leuven (also known as Louvain) in Belgium. But the Belgians soon came on board and the group of four clubs – La Quadrature - was born although it wasn’t a relationship of equals. Canterbury and Leuven were only linked via their original contact clubs of St Quentin and Utrecht respectively.

In 1959 the fifth club in what was to become the Pentangular group came into the frame. A relationship was evolving between the internationally adventurous St Quentin Club and the Rotary Club of Lüdenscheid, in what was then West Germany. At first it was only an informal relationship but the friendship grew and in 1963 the first five-club meeting took place. But it was another eleven years before those who dreamt of a formal union between all five clubs finally had their wish - it was Canterbury that remained aloof.

It wasn't until 1972 that Canterbury finally agreed to join the formal group - the same year that the UK joined the European Economic Community. So, 17 years after St Quentin’s tentative moves at increasing its number of contact clubs, Pentangular was born. It was fitting that David Thompson, the son of John Thompson, the president who oversaw the first links with St Quentin 25 years earlier, was the president who drove through Canterbury's joining of the group that became known as Pentangular. From that day the relationshiip thrived and gets stronger year by year.

The Pentangular weekend is generally scheduled in mid to late May and it follows a set pattern in the order of Canterbury, Utrecht, St Quentin, Leuven and Lüdenscheid. Canterbury hosted the event in 2012 (Harry Cragg’s presidential year) and in 2017 (Martin Ward's presidential year).

Accommodation is encouraged to be ‘with families’ with hotel facilities booked as required. The weekend starts on Friday evening and ends on Sunday afternoon and comprises about 200 Rotary members and their partners. A series of local visits takes place during the weekend with a Grand Dinner on the Saturday night.

There is generally a theme to the weekend and this can best be described as eclectic. The first Pentangular in 1963 had as its theme “The Common Market and European Community” – some things never change! Since then topics have included pollution, the protection of nature, youth and art. 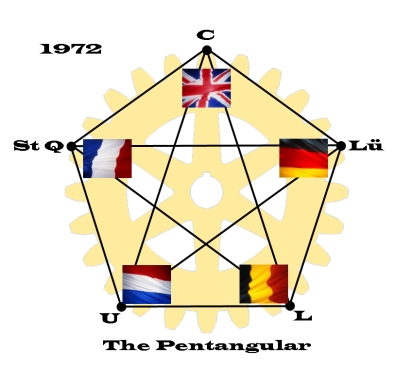 Sadly, 2010 saw a radical change in the make-up of Pentangular. The newer, younger, members of the Rotary Club of Utrecht in the Netherlands, who hadn't grown up with, and helped develop, the tradition of Pentangular felt they could no longer support its ideals. Although Utrecht had given notice two years earlier of its intention to leave this unique grouping, it nonetheless came as a shock to those with long memories of Pentangular. Many close friendships had been forged with members of the Rotary Club of Utrecht and there is genuine sadness at the club's departure.

But Pentangular is a forward-looking and progressive union and a search was launched immediately to fill the void left by Utrecht. A more than suitable replacement was found in the form of the Rotary Club of Leiden - a town near the North Sea coast not far from The Hague. We look forward to a long and happy relationship with our 'new' partner. 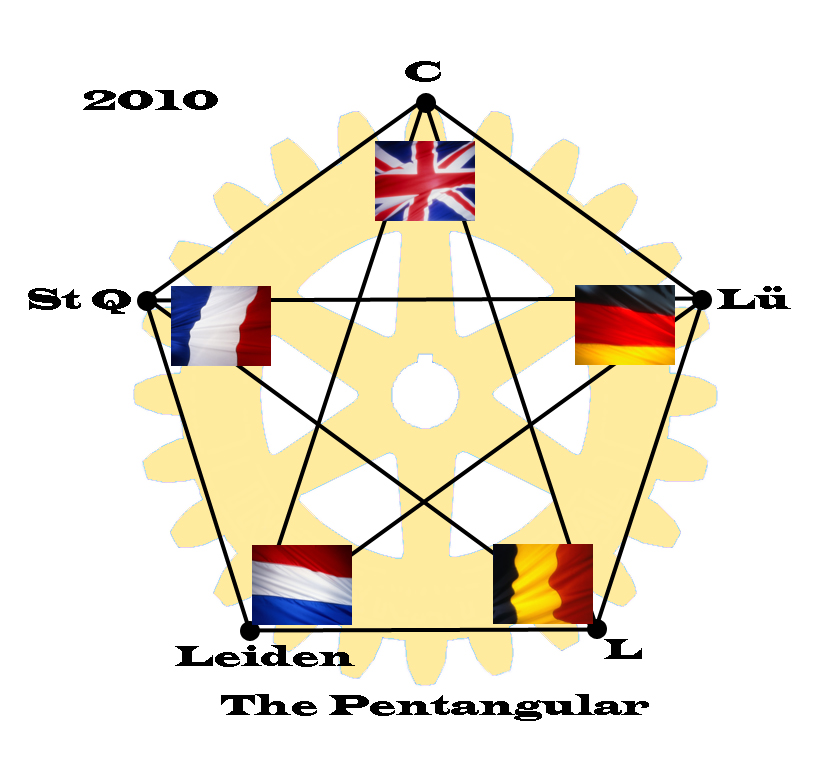 One of the benefits of our Pentangular Group is that we arrange for two young people from Canterbury to meet with two people from each of the four member Clubs in one of the five host cities for a week. The purpose is to learn more of each other and their countries and again to establish friendships which often last for many years after the brief week together.

But it’s not just fun and international friendship that drives Pentangular. Underlying it all is the primary Object of Rotary: Service.

The five Pentangular clubs are uniquely placed to generate matched funding from Rotary Foundation and other statutory bodies from initially modest amounts to support big international projects which would, more than likely, be an impossible achievement for individual clubs. In the past the Joint Pentangular Project (JPP) has rebuilt a hospital in the West African state of Ghana. The next JPP, led by the Canterbury Rotary Club, is supporting a girls' school in South Sudan. It's a great example of international fun and fellowship helping to bring aid to a less well off part of the world.

Click to find out more about the five Pentangular clubs