An American supper at lunch – with outrageous socks too! 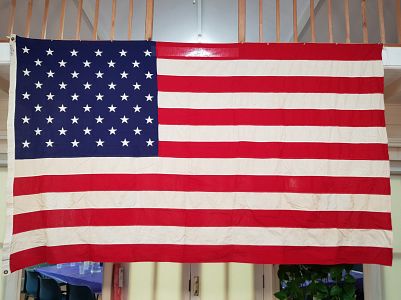 Our lunch meeting yesterday was a purely social gathering with guests – at the home of one of our Members and with an “American Supper” theme. And what about the socks…? Read on...

“What’s an ‘American Supper’?” you may ask. Well, there seem to be different opinions on the internet but our Members took it to be what many Americans call a “Pot-Luck” meal.  The instructions stated: “everybody attending is asked to bring a course for six people and your own drinks”.

On entering the venue (the high-ceilinged yoga studio at the home of PP Richard Kemball-Cook and his wife Cora, where Cora gives Yoga lessons) we realised it was also “American” in a different sense: we were greeted with a huge “Stars & Stripes” flag and the music included archetypally American hits such as the songs from the musical “Grease”.

Cooking has already been on our mind lately thanks to the FREE recipe book we launched for World Polio Day, but we were truly impressed by the array of dishes everyone brought in – ranging from healthy salads to chicken biryani and even chicken & chips! Desserts included Key lime pie, fruit crumbles and the most delicious-looking roulade!

But our eyes didn’t just have a feast in the culinary sense. Because we were sitting in the yoga studio, we’d been asked to take our shoes off and wear the most outrageous socks – to be judged, for fun, in a competition. Not everyone stepped up to the mark, but an array of styles WERE on show: from the outrageously square, the well-travelled (from Mongolia), to the colourfully exuberant. Rather than the traditional greeting of “hello, how are you?”, this meant many were greeting each other with “hello - let’s see your socks then”!

After the meal Richard was asked to judge the competition; he started by telling us about his own colourful socks – with a design based on the colours and markings on guide ropes. Rotarians and guests took their turns to parade their own footwear. Argyle checks, garish stripes and psychedelic patterns were all on display. One Rotarian had designed her own pun-ny pair with a marker: one odd sock stated “Lonely sock, looking for a sole mate”; the other “I think we make a great pair”. A small hole in her sock had an arrow pointing to it with the words “hole in my sole”!

Richard took his job seriously and after careful consideration awarded the winning prize to Rtn Graham Bough who had sported a brightly-coloured pair of socks resembling a hilly landscape.

The competition was a good laugh and brought the wonderful meal and happy gathering to a lovely end. President Stephen Thompson drew the meal to a close by thanking hosts Richard & Cora, all the talented “chefs” and helpers who brought and laid out the hall and food, and PP Peter Hermitage who oversaw the music. As some Americans might say “it was totally awesome”!

Picture: The "Stars and Stripes" hanging in the spacious hall of Canterbury Yoga. Picture credit: Rotary Club of Canterbury.

Further pictures will be available on our Facebook page soon. https://www.facebook.com/rotarycanterbury