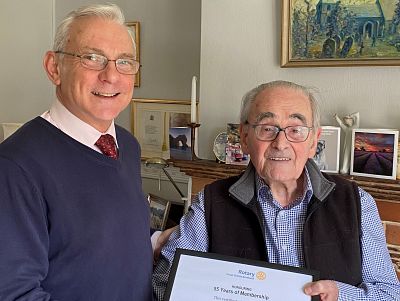 It was a great pleasure for our President Stephen Thompson, along with his wife Sue, to present Rotarian David Naumann with a Long Service Certificate for a remarkable 55 years of service to Rotary.

David, who recently celebrated his birthday, was found to be in remarkably good form, surrounded by dozens of birthday cards. He was "full of fun and enjoyed hearing how the Club is faring," said Stephen.

David also received a letter from Shekhar Mehta - Rotary International President 2021-2022 - congratulating him on his 55 years of Rotary service.

David is a Past President of the Rotary Club of Sandwich (when he lived there as a vicar in the 1980s) and joined our Club on his return to Canterbury.

Meanwhile, we were saddened to have learnt of the passing of PP Roger Bickerton - just days after the Club announced his Long Service Certificate at our Centenary event. "Roger was a great servant of the Club and was generous in so many ways.  You could always call on him for his memories of past events or past members and he always had time for a chat," said Stephen on learning of his death. We pass on our sincere condolences to Roger's family and all who knew him from when he owned Kennedy's shoe shop in Canterbury.