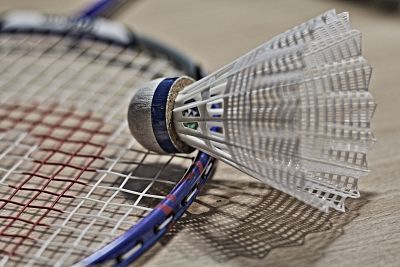 Part of a series of articles about our Members, helping you to know more about the things that we do when we're not doing Rotary activities! Here, a Member talks about his involvement with badminton coaching.

When I was asked to talk about a hobby or spare time interest, past or present, the first thing I thought of was my years of badminton coaching.

When I was younger, I was quite a good tennis player and athlete and generally enjoyed sports. In 1959 I came what I thought was a disappointing 204th in a cross-country championship - only to be told that the world record runner, Derek Ibbotson, had came 207th!

Anyway, after going to university, getting my degree and working full time, I found that it often rained whenever I planned to go out and play tennis. "Rain does not stop play," I thought, and looked around for an indoor sport to play instead. Badminton seemed the best idea, and I proved to be pretty good at it. I played well enough to play in the "first division" in places where I lived and worked: Shropshire, Cambridge, North Wales - and, more locally, Folkestone and Hythe.

While I was in Wales a local counsellor offered £600 to the Welsh Badminton Union and I used that to set up a Welsh Open Tournament for juniors. Around 200-400 youngsters aged up to 18 years, from all over the world, would participate - including youngsters from France, Denmark, Holland and other regions and countries. I got recognition from the Welsh Badminton Union and was asked to coach the country's best 12 boys and girls. This I did for a number of years.

During my years of coaching I met quite a few famous sports people of the day, including former Wales Rugby Union captain Gerald Davies and others. In the mid-70s the BBC was learning how best to televise badminton, which they did by setting up scaffolding along the wall of Aberystwyth University (that I worked at with the Sport's Council - with Gerald Davies as the Sport's Council representative). It was quite an exciting time for the sport.

While I was in Folkestone, I coached two boys who were in the England Junior Squad for a couple of years. The youngsters got to the final of the All England Junior Championships - I like to think I contributed a little their success!

Although I can still coach (I'm still an advanced level coach), I don't do it nowadays. One of the key skills a coach can demonstrate is how to take a shot at the shuttle(cock) - but it's probably one of the most physically demanding tasks - hitting what is probably the fastest projectile in sport (other than an arrow). Knees take a lot of hard knocks in the sport (figuratively and literally) and since I had a "new" knee fitted I find I can't move as well as I'd like to - although I did continue to go to the All England Championships for a number of years. Now, I fear I'm too old and unstable. Instead, I focus most of my sporting attentions on cheering on Liverpool, “the best football team in the world – and that’s official!”

With thanks to Rotarian Andrew Barchi for this article.

If you want to learn more about the history of badminton, you can look here.

You can also find out more about the sport in England here.

You can watch videos from Badminton World TV on youtube here.

There are some videos of truly amazing rallies on youtube here, and the longest rally here.

Picture: A badminton racket and shuttlecock. Image by Tabble from Pixabay.