A fun evening of bingo for Rotarians & guests 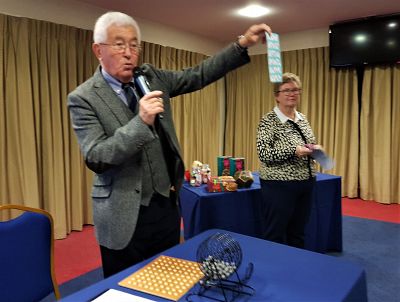 It was "eyes down" for our Rotarians and their guests during a special bingo evening held on Tuesday.

We had the pleasure of many guests and visitors joining our meeting - including members of the Forest of Blean Rotary Club, members of Inner Wheel, and even a prospective member.

The bingo caller for the evening was PP Peter Hermitage; ably assisted by our club's Secretary, Maxine Blades.

Peter kicked off the proceedings by explaining the rules and asking who was ready to play "B-I-N-G-O"! He rolled the bingo cage full of bingo balls and called out the numbers one by one with all of the classic bingo calls: "Blind 20; 2 and 7, gateway to heaven; 4 and 3, down on your knees; 4 and 4, droopy drawers; 3 and 8, Christmas cake" and so on. And there were all the old favourites too - reference to PC 49, the 57 varieties of Heinz and Kelly's eye, number 1. Whenever number two (the little duck) was called out, a member of the audience gave out a "quack", and when 22 (two little ducks) came up Peter remarked "I was waiting for that to come up, just because I like the expression so much!"

Things didn't all go smoothly. There were a couple of false calls of "bingo" from one or two over-enthusiastic audience members, and at various times a ball escaped and rolled across the floor before it was rescued by Maxine.

When the balls were rolled in their cage we heard a gentle, but quite squeaky, whirring, prompting Peter to remark: "it's a lovely sound, isn't it?" Sensing the non-existent tension in the air, Peter asked the audience several times if anyone was sweating yet!

At the end of each round of play the winners were given their prizes - and then at the end of the evening Peter also announced the raffle winner. Our President Stephen Thompson thanked everyone for attending and presented Peter with a bottle of wine for his efforts.

In total £234 was raised, which will be split equally between PolioPlus and our Centenary Drinking Water Filling Point.

Picture: Peter gives out the instructions, helped in the background by Maxine. Picture credit: Rotary Club of Canterbury.