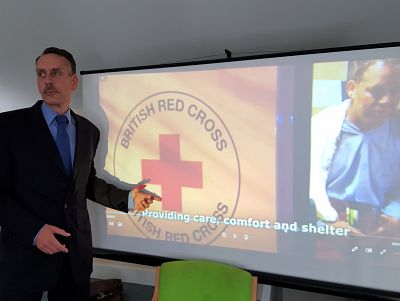 Most people have heard of the British Red Cross, but even some of our members were surprised by the range of services it provides. So it was a pleasure to find out more from one of its Senior Community Fundraisers, Charles Marshall

Charles has a background in fundraising, having worked for a number of other organizations including UNICEF in India. He is well aware of public misconception about the organization, with people all too often thinking it is primarily involved in overseas disaster relief (such as the devastating earthquake in Katmandu earlier this year and, since Charles’s talk, the earthquake and Tsunami in Indonesia).

In actual fact, the lion’s share of the organization's work is in the UK, with its various activities all threaded together by a mission to “refuse to ignore people in crisis”. It works to help people right across the community – old and young, people with and without disabilities, people who were born here, people who were not.

Charles focussed his talk on Canterbury, telling us first about the Red Cross Emergency Response Service based at its Lower Chantry Lane site. Charles asked us to imagine a home fire in which the home burns down: the fire service comes and puts out the fire. But the victims are left without their clothes, their wallets or purses, their mobile phones. How can they call people? Who will help them now they are 'destitute'? This is where the British Red Cross steps in; an emergency response vehicle brings clothing and footwear for those affected by the fire, and the organization can help make calls, lend money and arrange temporary accommodation. In fact the British Red Cross is mandated to provide this support to blue light services. What it does is “help in those first few stumbling steps towards recovery”. A national example that we are all aware of, but perhaps haven’t thought about much, is the enormous support the British Red Cross gave following the Grenfell tragedy in London. It was there within the first few hours…and three months later it was still providing much needed support.

A second service the organization provides is First Aid training. The Red Cross believes that everyone over 11 years old can be taught first aid – meaning they could help someone while waiting for an ambulance following a road traffic accident, for example. Recent research shows that in many instances when people had died before an ambulance got to them, there had been a “window of opportunity” to help them. Two techniques are particularly effective at this time (1) putting someone who has collapsed but is still breathing in the recovery position and (2) applying pressure for serious bleeding. Six out of ten people’s lives, Charles said, could have been saved using these.

The Red Cross offers a range of training courses – in the community, workplace, even schools. In fact, at the moment the organization is lobbying the government to get first aid training to schools.

Specials courses focus, for example, on first aid for children and toddlers – something of interest to many parents and increasingly important when there is so much pressure on A&E departments across the country.

A third service that the organization provides is the loan of wheelchairs. Wheelchairs can be costly (starting around £220-£230 for a standard chair), and sometimes they are only needed temporarily. For instance, they may be needed by a young person following an injury so that they can attend school, or by an older person who otherwise would be stuck in hospital, socially isolated from friends and their community.

The Red Cross can provide many different types of chair – for example it has chairs that are pushed or chairs where the user ‘pushes’ themselves.

Charles showed us an emotional film (well worth watching), which reminded us of what the Red Cross does – covering the services Charles had mentioned and some others he had not, such as the care it can provide in the home setting following an accident or illness.

The British Red Cross has seven fundamental principles which it shares as part of the International Red Cross and Red Crescent Movement: humanity, impartiality, neutrality, independence, voluntary service, unity and universality. Charles reminded us that all of its services are dependent on donations by the British public, so its work is funded by the generosity of ordinary people.

You can find out more about the British Red Cross, its work, services and training courses here. There are also ways to donate to the organization, to fundraise or to volunteer.

You can also watch videos on its youtube channel with advice, tips and examples, as well as further information about its work in the UK and abroad.