A fun fundraiser: a celebration of Burns night! 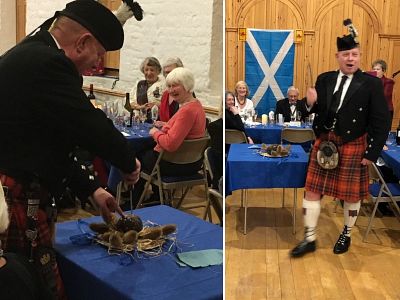 A group of around 38 Members and their guests had a very enjoyable celebration of Burns night last Saturday, incorporating several Burns night traditions during the evening!

Burns Night, which marks the birth on 25th January 1759 of the Scottish poet Robert Burns, is a celebration of his life and poetry. Our event was held on the 28th.

The evening kicked off with piper, Ivan Brooks (dressed in the traditional uniform of kilt, plaid and feather bonnet), playing the bagpipes with great aplomb while "piping in" those sitting at the top table: President Stephen Thompson, his wife Sue, and their guests.

Ivan then officially welcomed everyone in Scottish using text adapted by Past President Peter Hermitage. Next, he piped in the haggis which Sue held above her head as it was brought in. In was placed on a table in the centre of the room; the piper then addressed it with twelve verses by Burns and ceremoniously "stabbed" it before it was taken away to be served to the guests.

The first course of the meal, all of which was prepared, cooked and served by Sue Thompson, was haggis, "neeps" (mashed swede/turnip) and "tatties" (potatoes) – layered and oven baked in a ramekin. It was served, of course, with a tot of whisky.

The delicious main meal was cumin spiced lamb, served with oven-cooked rice and coleslaw salad; this was followed by a "Cranachan" - a Scottish dessert made with caramelised oatmeal, yoghurt and raspberry sauce.

The evening's entertainment started with Peter Hermitage giving a brief life history of Robert Burns, interspersed with poetry, followed by a narration of Burns's poem recounting the tale of "Tam o' Shanter". Past President Martin Ward played the role of narrator, Peter played the often-drunk Tam, while our Club Secretary, Maxine Blades, played Tam's long-suffering wife. We learned of Tam riding home on his horse Meg during a storm. He passes a local church where witches and others are dancing and playing music. He loses his reason on seeing one short-skirted witch. Tam flees while he is chased by the group and poor Meg's tail is pulled off just as she reaches the Brig o' Doon.

Next, Rotarian Jim Gascoyne gave the traditional "Address to the Lasses" and Maxine followed with the "Toast/reply to the Laddies". Piper Ivan then played a medley of tunes on the bagpipes before Stephen gave the vote of thanks.

Finally everyone got up to sing "Auld Lang Syne" before the evening's fun came to an end.

In all, the fundraiser raised over £200 which will go to the club's charity account. Our thanks to all who took part and assisted with the event and made it such a fun evening!

More pictures and short sound clips can be seen/heard on our Facebook page.