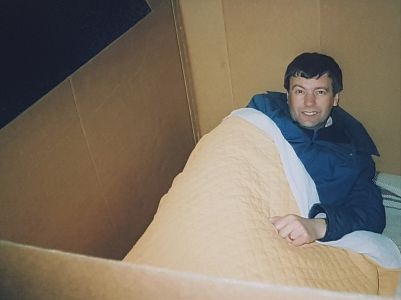 When one of our Club Members, Rtn David Lewis, mentioned in passing that he’d been a member of 10 Rotary Clubs we couldn’t resist getting him to tell us more…

We’re not sure how unusual it is for Rotarians to have been members of 10 Rotary Clubs over their lifetime, but are sure it can’t be that common! David of course has a very good reason for all the change: he is a longstanding and very active member of the Salvation Army, and has moved around the country for his various posts. It is a delight for us to have David in our Club now; he plays a very valuable and much appreciated role as Almoner, keeping an eye on the welfare of  our Members and making sure that those who are struggling with illness or other issues know that we are thinking of them.

This year David marked 40 years since he first became a Rotarian, back in 1978. Below is a list of all the clubs that David was a member of, followed by a club-by-club account of his experiences. Amazing that he could fit it all into one article!

I was introduced to Rotary through one of my congregation who invited me to give a talk about the Salvation Army’s work locally, nationally and internationally. This I did with pleasure. I also gained some idea of what the Rotary Movement meant. I was surprised a few weeks later to be asked if I would attend as a guest of the club. At this meeting I was asked if I would be interested in joining as a member of the club. I gave some thought to this and a few weeks later was inducted as a member!

During the weeks to follow I learned a great deal about Rotary ideals and service. I felt the very good fellowship offered by members of the club … and within a few months I was asked to become Chairman of their Vocational Service Committee! I accepted the challenge, although it was a slightly difficult task as the Vocational Service part of Rotary was difficult to define. However, I soon learnt!

I spent just over a year in the club before having to move to a new part of the country. My first encounter with Rotary stood me in good stead for enjoyment as a Rotarian for the years to come.

I contacted the secretary of the club who said that he would look out for me at the next Rotary meeting and introduce me to the club members.

I had two very happy years at the club, still discovering the many avenues of service that Rotary members gave so willingly to the local community and beyond.

My local bank manager, who was a friend of the Salvation Army and a Rotarian, introduced me to the club and often transported me to its meetings. We met at a hotel on the Cromer sea front.

I was in a unique position as the leader of the Salvation Army with its connections with the Sheringham life boat and its crew (some of whom were in my brass band). I was honoured to be able to organise many joint fund- raising events with the club. One of which was raising monies for ‘Save the Children’ on the Sheringham sea front with our band.

I spent 4 years at this very happy and busy club.

As with previous clubs, I found the fellowship and friendships to be wonderful!

Through my vocation I was able to organise various events for ‘Polio Plus’, one, including a ‘Grand Auction’ of furniture which raised hundreds of pounds, and also an ‘Old Time Musical’ evening. However, the service which we were able to give to the community with our time and effort was at the forefront of our Rotary Club members' actions. As we refurbished the Salvation Army Hall, we were able to provide a lounge for the Rotaract* Club to use and to have a good opportunity to recruit new members. (The Rotary members supplied some finance to make this possible).

Due to the fact that we lived and served in an area of Hull that was fairly poor and needed much support, the club gave tremendous service to the Salvation Army in many ways.

Each year the club hired coaches to take underprivileged children (and their parents) on outings to theme parks. The largest council estate in Hull was particularly in great need of support. Along with much joint support we provided food parcels and Christmas gifts to very needy families. We even provided a double decker bus to take families out of the estate for day trips. The club supported me as I slept in the open air in a cardboard box for a week to support the homeless in Hull. (See picture.)

I was asked by the DG who was a member of our club to lead the Service of Worship at the 6th Annual Conference at Scarborough 1990. This was a great honour. I also took part in the annual ‘Kids Out’ trips which was great fun!

I stayed at this club for five years, which is the longest and one of the happiest.

Arriving at this beautiful City I soon found the Rotary Club and literally just walked into one of their meetings and asked if I could join!

It was a very friendly club. Again, being the leader of the Salvation Army in Bath gave many opportunities of joint activities and service to the community and beyond. I became a Trustee of the Genesis (furniture) Project, including organising Sunday lunches for the homeless, and the setting up of ‘The Ark’ café for the needy. In 1998/99 I became Junior Vice President, and also worked on an Employment Project. I was also involved in the Local Emergency programme. Many of these projects were kindly supported by the Rotary Club members.

I spent four very happy years at this club, getting involved with many of its activities and service.

Marian (my wife) and I moved to Folkestone in 1998. I joined the club and immediately felt the warmth of welcome.

As time went on I was able to take part in many of the club’s events. This was difficult at times as I was involved in raising finance for a very much needed church and community centre. However, the support that the club and their various contacts were most helpful at this time. During my time there I was given the responsibility of recruiting new members and organising ‘open days’ with lots of Rotary information for possible prospective members. Later I became Vocational Chairman once more, and eventually was asked to be ‘Junior Vice President’, which I accepted.

Unfortunately, I wasn’t able to become President as the Salvation Army moved us on again. In all, I’d spent 4 years at the club.

The Folkestone club sent four members to my first meeting at the Wickford Club. One of the members was Noel Tatt who I worked closely with, along with the club President. I was most surprised by their visit and support, even the DG for the district turned up!

Actvities included the supply of a Mini Bus bought by the club for the use of the Salvation Army’s community service programme – this was a great help in many ways. This vehicle was also used for occasional Rotary events and trips.

The stay in Wickford was only for one year; however I enjoyed the fellowship and service of the club. I was very sorry to leave the club after such a short time.

In 2005 I joined the Maldon Club. I found the club to be very friendly and busy involved with the community in a variety of ways.

After a while I became Community Service Chairman and had a very good and experienced committee which enabled us to take on many ‘service’ events for the community. The club was full of great fellowship and fun! Eventually I was asked to be President Elect. This I felt was a great responsibility but I enjoyed the experience and again I had wonderful support from the membership, particularly having the responsibility of organising the President’s Evening. This was held at the local Golf Club. I took my team to the golf club on various occasions for the planning of the event. It was rare for us not to have a full turnout (the food was good!)

I commenced preparations to become President of the Club, but sadly I had to move to a new Salvation Army appointment. However, the club did still want me to be President – if only for a few weeks! So I took the Chair just some weeks before leaving. There was a big surprise for me: as I handed the chain of office over to the new President, I was awarded a Paul Harris Fellowship for my work with the Salvation Army and for my service to Rotary over the years.

A break from Rotary

Due to moving to Godmanchester for a short time, then to South Shields, I wasn’t able to attend Rotary for a while. At South Shields I was particularly involved with various rough sleeper’s projects and providing meals for them. In 2012 Marian and I retired and moved to Chartham (where Marian was born and grew up). Both our children, Mark and Janine, are Salvation Army Officers who also moved around the country as we did!

Once we settled in our new home, I felt that it was time to join Rotary again (I had missed it very much) so I came to our club and felt very welcome by various members.

I particularly felt very honoured to lead along with David Naumann the Sunday morning Service at Christchurch University as part of the wonderful Pentangular events in 2017. I have enjoyed my time on the Community Service Committee, and now look forward to the Vocational Service Committee meetings and activities.

In my present role as Almoner I am able, I hope, to fulfil my vocation and service to the club. I have appreciated the fellowship and kindness of members and look forward to serving in the club for the foreseeable future.  My story continues……

Picture: David – in a box! While at the Holderness Club David slept in the open air in a cardboard box for a week to support the homeless in Hull. Picture credit: David Lewis.