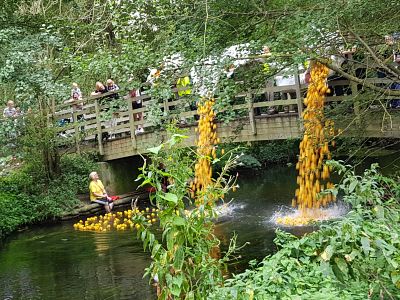 The sun was "out" and fun was "in" at our Annual Duck Race, held on Sunday at Westgate Gardens in Canterbury. Over 4,000 ducks were launched into the Stour at the event, watched by hundreds of spectators.

Over the last few years the race had become increasingly popular and it's been a great pleasure to see so many people come and enjoy it. We were very disappointed when we had to cancel the race last year, which made it all the sweeter that this year's race could go ahead.

The weather forecast had suggested rain at some point during the day but, thankfully, the only things that got wet were our lovely yellow ducks and a few brave Rotarians and colleagues who helped out in the water!

From 11am onwards one could feel the buzz as excited spectators - many quite young - gathered along the river to cheer on the ducks. This year we added a bric-a-brac stall, and a trumpeter came along to provide some lively music. As usual, our Master of Ceremonies, PP Peter Hermitage, did an excellent job with an assortment of puns and jokes. He was joined this year by Kelsey from King Ethelbert's School in Birchington, one of the competitors in our Innovation Competition who we'd invited to participate.

We were honoured to be joined by the Lord Mayor of Canterbury, Councillor Pat Todd, and the Lady Mayoress, Doctor Elizabeth McGown.

The Lord Mayor helped manoeuvre the ducks into position and at 1pm a simultaneous countdown at both the start and end points of the race was the signal for a bunch of strong Rotarians and helpers to launch the ducks from the bridge. "Mama Duck" and a few other special ducks joined the race for a bit of added fun. Brave steerers, Rtn Phil Abbott and Liz Baker, kept the ducks from going astray, or getting left behind or tangled in the weed.

The ducks jostled their way down the river towards the finishing line, cheered on by the public with shouts of "Come on, Duckie" and "Hurry up Duckie, hurry up"!

The winning duck, number 564, was captured crossing the finishing line by the recovery team and announced by Peter; this was followed with a tight race for 2nd and 3rd position!

Corporate duck no. 67, sponsored by Nash Harvey, was the first of the corporate ducks across the finishing line.

All-in-all it was a wonderful day and a splendid chance for us to raise funds for the great causes we support as well as to bring a smile to so many faces. The final figures are not in yet, but we reckon we've raised around £5,000 in total from the event.

We're grateful to all who helped us put on the race, including My Canterbury and the Kentish Gazette. Many thanks too to the Lord Mayor and Lady Mayoress of Canterbury, the friendly folk from St John Ambulance and to the police and PCSOs who were there. As always, thanks to Westgate Parks, Canterbury City Council and to Rotarians, Inner Wheel volunteers and other helpers who helped with the 'sale' of ducks and who were keeping an eye on proceedings during the day.

A special mention to Rtn Dee Mepstead, Chair of our Fundraising Committee, who oversaw all the organisation for the race, to Race Day Coordinator PP Viv Pritchard, Health & Safety Officer Raj Dasan, the launch party, headed by PP Alan Mepstead, and the recovery party, headed by PP Martin Ward. A big shout out to PP Tim Brett who, as usual, cheered many youngsters in his fetching duck outfit!

We are delighted that members from The Rotary Club of Canterbury Sunrise and Rotary District were able to join us and would like to thank Sunrise's President, Jarle Tatt, for the loan of their gazebo. Although beset with technical issues, Sunrise's Sinitta Nightingale also did a live stream from the riverbank. We hope we haven't missed anyone out - it was a splendid team effort.

We'd also like to thank all who spread news of the event, whether it be on social media, print, the radio, or by word of mouth - including My Canterbury, Community Ad, BBC Radio Presenter Pat Marsh, Canterbury Kids - Outside In, various Rotary Clubs and Rotary Radio UK.

Finally, our biggest thanks go to members of the public that either bought ducks or came along with friends and family to cheer the ducks on the day and made the event such a success!

Picture: The ducks being launched into the river Stour at the start of the race. Picture Credit: Rotary Club of Canterbury.

Pictures and video clips from the day can be seen on our Facebook page.