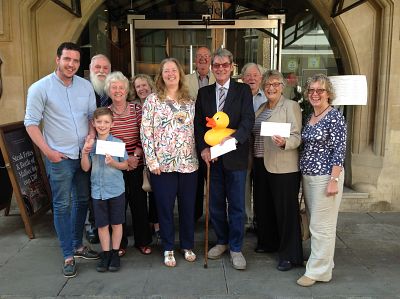 The winners of our Rotary Duck Race held in mid September were presented with their individual cash prizes by the President of our club, Sharon Jordan, at the Abode yesterday. The first prize was won by Tim Woods, the 2nd prize by Elliot Jordan (who bought his duck just a few minutes before the start of the race) and the third prize by Alice Lyle (who couldn't make the presentation).

The Corporate Duck was won by John Alder of Nash Harvey Accountants.

The final amount raised from the Duck Race this year is in the region of £6500, thanks to everyone’s generosity. The funds will go to support our local and international charities.